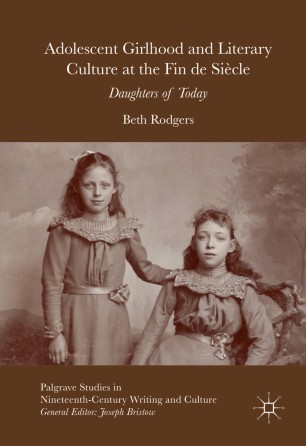 Adolescent Girlhood and Literary Culture at the Fin de Siècle

This book examines the construction of adolescent girlhood across a range of genres in the closing decades of the nineteenth century. It argues that there was a preoccupation with defining, characterising and naming adolescent girlhood at the fin de siècle. These ‘daughters of today’, ‘juvenile spinsters’ and ‘modern girls’, as the press variously termed them, occupying a borderland between childhood and womanhood, were seen to be inextricably connected to late nineteenth-century modernity: they were the products of changes taking place in education and employment and of the challenge to traditional conceptions of femininity presented by the Woman Question. The author argues that the shifting nature of the modern adolescent girl made her a malleable cultural figure, and a meeting point for many of the prevalent debates associated with fin-de-siècle society. By juxtaposing diverse material, from children’s books and girls’ magazines to New Woman novels and psychological studies, the author contextualises adolescent girlhood as a distinct but complex cultural category at the end of the nineteenth century.