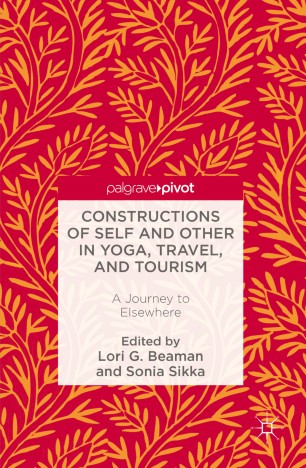 Constructions of Self and Other in Yoga, Travel, and Tourism

A Journey to Elsewhere

This volume considers the phenomenon of yoga travel as an instance of a broader genre of ‘spiritual travel’ involving journeys to places ‘elsewhere’, which are imagined to offer the possibility of profound personal transformation. These imaginings are tied up in a continued exoticization of the East, but they are not limited to that. Contributors identify various themes such as authenticity, suffering, space, material markers, and the idea of the ‘spiritual’, tracing how these ideas manifest in conceptions and fetishizations of ‘elsewhere.’  To deepen its analysis of this phenomenon, the book incorporates a wide range of disciplines including architecture, sociology, anthropology, philosophy, women’s studies, religious studies, and history. While the book’s primary focus is yoga and yoga travel, contributors offer up an array of other case studies. Chapters delve into the complex questions of agency and authenticity that accompany the concept of ‘spiritual travel’ and ideas of ‘elsewhere’.
Lori G. Beaman is the Canada Research Chair in the Contextualization of Religion in a Diverse Canada and Professor in the Department of Classics and Religious Studies at the University of Ottawa, Canada. She is also Principal Investigator of the Religion and Diversity Project, an international research team.
Sonia Sikka is Professor of Philosophy at the University of Ottawa, Canada. Her recent research involves comparative studies of religious identity and secularism in Canada, India, and the United States. Her publications include Living with Religious Diversity(2015) and Multiculturalism and Religious Identity (2014) (both edited with Lori G. Beaman), as well as Herder on Humanity and Cultural Difference (2011).