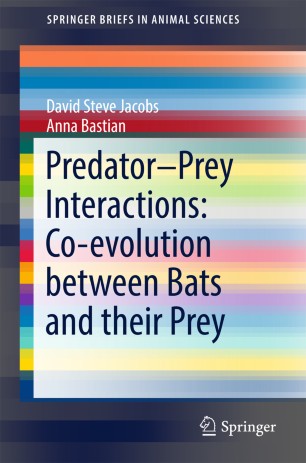 Predator–Prey Interactions: Co-evolution between Bats and Their Prey

Part of the SpringerBriefs in Animal Sciences book series (BRIEFSANIMAL)

This book provides a comprehensive review of the evolution of traits associated with predation and predator defense for bats and all of their prey, both invertebrates (e.g. insects) and vertebrates (e.g. frogs), in the context of co-evolution. It reviews current knowledge of how echolocation and passive hearing are used by bats to hunt prey in complete darkness. Also it highlights how prey have evolved counter measures to bat echolocation to avoid detection and capture. This includes the whole range of prey responses from being active at times when bats are inactive to the use of acoustic signals of their own to interfere with the echolocation system of bats.