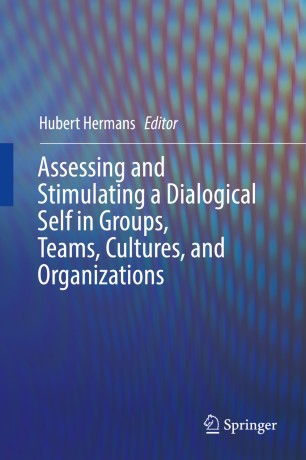 Assessing and Stimulating a Dialogical Self in Groups, Teams, Cultures, and Organizations

This book presents 9 theory-based and practice-oriented methods for assessing and stimulating a multi-voiced dialogical self in the context of groups, teams, cultures, and organizations. All of these methods are based on Dialogical Self Theory. The book deals with the practical implications of this theory as applied in the areas of coaching, training, and counselling.  A number of chapters focus on the process of positioning and dialogue on the level of the self, while other chapters combine self-processes with group work, and still others find their applications in leadership development and team-work in organizations. For each of the nine methods, the chapters present theory, method, case-study and discussions and make clear what kind of problems can be tackled using the method discussed.

Specifically, the book discusses the following methods: A Negotiational Self Method for assessing and solving inner conflicts; a Self-Confrontation Method used to assess and stimulate personal meaning construction in career counselling; a Method of Expressive Writing in the context of career development; a Composition Method for studying the content and organization of personal positions via verbal and non-verbal procedures; a Dialogical Leadership Method that investigates and stimulates dialogical relationships between personal positions in the self of leaders in organizations; a Personal Position Repertoire Method that combines the assessment of personal positions with focus group discussions; a Team Confrontation Method for investigating collective and deviant positions or voices in organizational teams; a Method for Revising Organizational Stories with a focus on their emotional significance: and a Technique for Assessing and Stimulating Innovative Dialogue between Cultural Positions in global nomads.

Hubert Hermans is emeritus-professor at the Radboud University of Nijmegen, the Netherlands. He is the leader of a long-term, international project on the dialogical self. His dissertation (1967) was on Motivation and Achievement and resulted in two psychological tests: The Achievement Motivation Test for Adults (1968; published in English in 1970) and The Achievement Motivation Test for Children (1971). Since then, both tests belong to the most frequently used psychological tests in the Netherlands (more than 4 million copies of the tests were sold over the decades). As a reaction to the static and impersonal nature of psychological tests, he developed a Self-Confrontation Method (SCM; see the book Self-Narratives. New York: Guilford Press, 1995). Application of this method in practice led to the establishment of the Dutch Association for the SCM that counts approximately 250 members in 2015. In the nineties of the last century he and his colleagues developed a Dialogical Self Theory, inspired by the American pragmatism of William James and the dialogical school of the Russian literary scholar Mikhail Bakhtin. Amongst his books are: Dialogical Self Theory: Positioning and Counter-Positioning in a Globalizing world (Cambridge University Press, 2010), co-authored by Agnieszka Hermans-Konopka, and the Handbook of Dialogical Self Theory (Cambridge University Press, 2012), co-authored by Thorsten Gieser. Since 2002 he is president of the International Society for Dialogical Science (ISDS) and since 2006 editor-in-chief of the International Journal for Dialogical Science (IJDS). For his scientific merits for society, he received the decoration of ‘Knight in the Order of the Netherlands Lion’ in 2002. For more info see his website www.huberthermans.com or http://en.wikipedia.org/wiki/Hubert_Hermans.