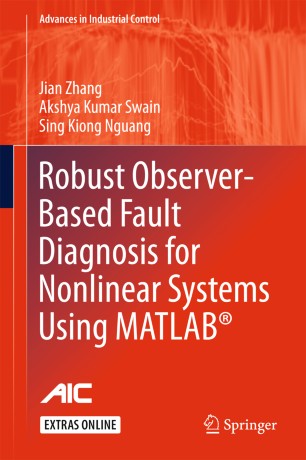 for the problem of fault detection, isolation and estimation, allowing readers to compare and contrast the different approaches. The authors present basic material on Lyapunov stability theory, H¥ control theory, sliding-mode control theory and linear matrix inequality problems in a self-contained and step-by-step manner. Detailed and rigorous mathematical proofs are provided for all the results developed in the text so that readers can quickly gain a good understanding of the material. MATLAB® and Simulink® codes for all the examples, which can be downloaded from http://extras.springer.com, enable students to follow the methods and illustrative examples easily. The systems used in the examples make the book highly relevant to real-world problems in industrial control engineering and include a seventh-order aircraft model, a single-link flexible joint robot arm and a satellite controller. To help readers quickly find the information they need and to improve readability, the individual chapters are written so as to be semi-independent of each other.

Jian Zhang received his PhD degree from the University of Auckland, New Zealand, in 2013. His main research interests include robust nonlinear control and fault diagnosis. He has published 14 refereed journal and conference papers on fault diagnosis, nonlinear filters and nonlinear system identification.

Akshya Swain received his PhD degree from the Department of Automatic Control and Systems Engineering of The University of Sheffield, United Kingdom in 1997. He has published over 140 referred journal and conference papers on nonlinear system identification, nonlinear control, control of wireless power transfer systems, wireless sensor networks and biomedical signal processing. He is currently on the editorial board of two international journals.

Sing Kiong Nguang received the PhD degree from the Department of Electrical and Computer Engineering of the University of Newcastle, Callaghan, Australia, in 1992 and 1995, respectively. Currently, he is a Chair Professor at the Department of Electrical and Computer Engineering, University of Auckland, New Zealand. He has published over 300 refereed journal and conference papers on nonlinear control design, nonlinear control systems, nonlinear time-delay systems, nonlinear sampled-data systems, biomedical systems modeling, fuzzy modeling and control, biological systems modeling and control, and food and bioproduct processing. He has served on the editorial board of a number of international journals, and is the Editor-in-Chief of the International Journal of Sensors, Wireless Communications and Control.