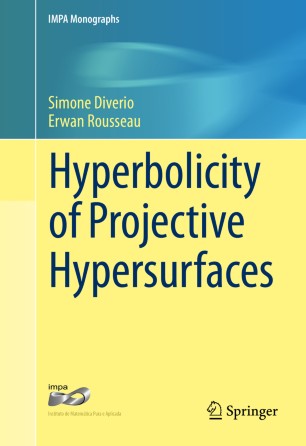 This book presents recent advances on Kobayashi hyperbolicity in complex geometry, especially in connection with projective hypersurfaces. This is a very active field, not least because of the fascinating relations with complex algebraic and arithmetic geometry. Foundational works of Serge Lang and Paul A. Vojta, among others, resulted in precise conjectures regarding the interplay of these research fields (e.g. existence of Zariski dense entire curves should correspond to the (potential) density of rational points).

Perhaps one of the conjectures which generated most activity in Kobayashi hyperbolicity theory is the one formed by Kobayashi himself in 1970 which predicts that a very general projective hypersurface of degree large enough does not contain any (non-constant) entire curves. Since the seminal work of Green and Griffiths in 1979, later refined by J.-P. Demailly, J. Noguchi, Y.-T. Siu and others, it became clear that a possible general strategy to attack this problem was to look at particular algebraic differential equations (jet differentials) that every entire curve must satisfy. This has led to some several spectacular results. Describing the state of the art around this conjecture is the main goal of this work.