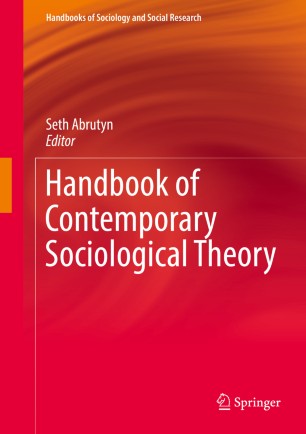 This Handbook provides the hidden common threads that tie sociological inquiry together and, featuring eminent scholars, it separates itself from its predecessors in substance and organization. Rather than rehashing old debates or longingly gazing at the past, this book presents sociologists with new ways of conceptualizing the organization and presentation of sociological theory. At the heart of this Handbook’s vision is the twin goals of making theory a viable enterprise by reconceptualizing how we teach theory and keeping theory closely tied to its empirical applications. Three strategies are offered: (1) Elucidating how classic issues like integration or interaction are interrogated today; (2) Presenting a coherent vision of the social levels of reality that theorists work on such as communities, groups, and the self as well as how the coherence of these levels speaks to the macro-micro link; and, (3) Theorizing the social world rather than celebrating theorists or theories; that is, one can look at how theory is used holistically to understand the constraints the social world places on our lived experience or the dynamics of social change. Hence, in the second decade of the 21st century, it has become clear that sociology is at a crossroads as the number of theorists and amount of theory available is increasingly unmanageable and unknowable by the vast majority of professionals and students. As such, this Handbook of Contemporary Sociological Theory presents the novice and the expert with the a roadmap for traversing this crossroad and building a more coherent, robust, and cumulative sociology.

Seth Abrutyn is an Assistant Professor of Sociology at the University of Memphis. Trained as a theorist, his interests include mental health, social psychology, emotions, in addition to sociocultural evolution and religion. In short, his work emphasizes synthesizing disparate theories in order to make more robust and comprehensive theoretical principles. His primary research focuses on the elucidating the links between meso-level structural and cultural forces and micro-level dynamics that shape adolescent suicide. His work on suicide can be found in the American Sociological Review, Sociological Theory, Journal of Health and Social Behavior, and Society and Mental Health.