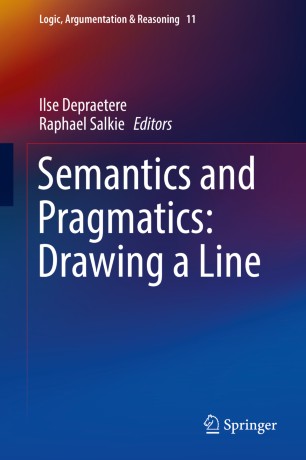 Semantics and Pragmatics: Drawing a Line

This book explores new territory at the interface between semantics and pragmatics, reassessing a number of linguistic phenomena in the light of recent advances in pragmatic theory. It presents stimulating insights by experts in linguistics and philosophy, including Kent Bach, Philippe de Brabanter, Max Kölbel and François Recanati. The authors begin by reassessing the definition of four theoretical concepts: saturation, free pragmatic enrichment, completion and expansion. They go on to confront (sub)disciplines that have addressed similar issues but that have not necessarily been in close contact, and then turn to questions related to reported speech, modality, indirect requests and prosody.

Chapters investigate lexical pragmatics and (cognitive) lexical semantics and other interactions involving experimental pragmatics, construction grammar, clinical linguistics, and the distinction between mental and linguistic content. The authors bridge the gap between different disciplines, subdisciplines and methodologies, supporting cross-fertilization of ideas and indicating the empirical studies that are needed to test current theoretical concepts and push the theory further.

Readers will find overviews of the ways in which concepts are defined, empirical data with which they are illustrated and explorations of the theoretical frameworks in which concepts are couched.  This exciting exchange of ideas has its origins in the editors’ workshop series on the theme ‘The semantics/pragmatics interface: linguistic, logical and philosophical perspectives’, held at the University of Lille 3 in 2012-13. Scholars of linguistics, logic and philosophy and those interested in the research benefits of crossing disciplines will find this work both accessible and thought-provoking, especially those with an interest in pragmatic theory or semantics.

Ilse Depraetere has held positions at KULeuven (Campus Kortrijk) and KUBrussel and is currently Professor of English Linguistics at the University of Lille 3. She is a member of the research group Savoirs, Textes, Langage (UMR 8163 STL).
Raphael Salkie is Professor of Language Studies at the University of Brighton. He has taught at the Universities of Poitiers, Paris XIII, Paris VII, and Lille3, as well as the University of Zimbabwe.
Both Editors have published widely on tense, aspect and modality, the semantics/pragmatics interface being in the foreground of their publications. They organised and actively contributed to the workshop series ‘The semantics/pragmatics interface: linguistic, logical and philosophical perspectives’. Both have been involved in translation teaching and research. Their joint publication, ‘Tense’, appeared in the Routledge Handbook of Semantics, Nick Riemer (ed.), published in 2015.

“This volume is a must-read book for any scholar who shows a keen interest in the issue of the boundary between semantics and pragmatics. And the format of the book is greatly impressive … . this volume, without any doubt, provides readers with a general picture of the most recent studies around the semantics–pragmatics interface, shedding new light on future research.” (Long Zhang and Shaojie Zhang, Journal of Linguistics, Vol. 55 (1), 2019)

“The book offers an extraordinary variety of specimens of collaboration between philosophers, linguists, and logicians on cross-boundary topics in semantics and pragmatics. … everyone with an interest in cross-boundaries research in semantics and (near-side) pragmatics will find much to chew on in this volume.” (Kepa Korta, Notre Dame Philosophical Reviews, ndpr.nd.edu, October, 2017)
Buy options