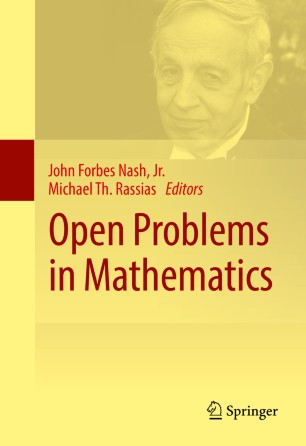 The goal in putting together this unique compilation was to present the current status of the solutions to some of the most essential open problems in pure and applied mathematics. Emphasis is also given to problems in interdisciplinary research for which mathematics plays a key role.  This volume comprises highly selected contributions by some of the most eminent mathematicians in the international mathematical community on longstanding problems in very active domains of mathematical research. A joint preface by the two volume editors is followed by a personal farewell to John F. Nash, Jr. written by Michael Th. Rassias. An introduction by Mikhail Gromov highlights some of Nash’s legendary mathematical achievements.

John Forbes Nash, Jr. was Senior Research Mathematician at Princeton University. Professor Nash was the recipient of the Nobel Prize in Economics in 1994 and the Abel Prize in Mathematics in 2015 and is most widely known for the Nash equilibrium in game theory and the Nash embedding theorem in geometry and analysis. He was also the recipient of the John von Neumann Theory prize in 1978. Nash's groundbreaking works in game theory, algebraic & differential geometry, non-linear analysis and partial differential equations have provided insight into the factors that govern chance and events inside complex systems in daily life. Moreover, Nash's theories are widely used in economics, computing, evolutionary biology, artificial intelligence, accounting, politics and other disciplines.
Michael Th. Rassias during his collaboration in 2014-2015 with John Forbes Nash, Jr. for the preparation of this book was a postdoctoral researcher at the Departments of Mathematics of Princeton University and ETH-Zurich, working at Princeton. He is currently a postdoctoral researcher at the Institute of Mathematics of the University of Zurich and a visiting researcher at the Program in Interdisciplinary Studies of the Institute for Advanced Study, Princeton. His research interests lie in mathematical analysis and analytic number theory. Rassias has received several awards in national and international mathematical Olympiads. He was also awarded the 2014 Notara Prize in Mathematics from the Academy of Athens. He has also authored, co-authored and co-edited five other books with Springer.

“It presents a collection of open research problems in pure and applied mathematics, but each article is written by a different specialist. … certainly you may find some appealing and engaging presentations in this collection of problems that somehow got the attention of John Nash.” (Felipe Zaldivar, MAA Reviews, maa.org, November, 2016)

“The editors of this book made a selection of problems they consider important and they have invited experts to write survey papers that give the state of the art of the problem or of the conglomerate of related problems, the historical attempts made to solve them, the methods currently applied, etc. … This is a wonderful book whose papers give us a guided tour along the heroic battle fields of mathematics.” (Adhemar Bultheel, European Mathematical Society, euro-math-soc.eu, August, 2016)