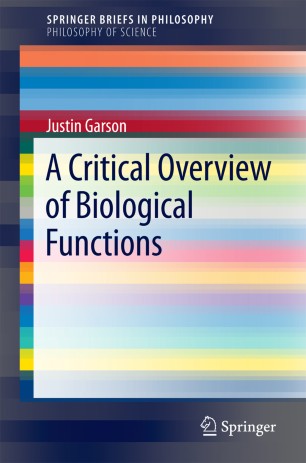 A Critical Overview of Biological Functions

This book is a critical survey of and guidebook to the literature on biological functions. It ties in with current debates and developments, and at the same time, it looks back on the state of discourse in naturalized teleology prior to the 1970s. It also presents three significant new proposals. First, it describes the generalized selected effects theory, which is one version of the selected effects theory, maintaining that the function of a trait consists in the activity that led to its differential persistence or reproduction in a population, and not merely its differential reproduction. Secondly, it advances “within-discipline pluralism” (as opposed to between-discipline pluralism) a new form of function pluralism, which emphasizes the coexistence of function concepts within diverse biological sub-disciplines. Lastly, it provides a critical assessment of recent alternatives to the selected effects theory of function, namely, the weak etiological theory and the systems-theoretic theory. The book argues that, to the extent that functions purport to offer causal explanations for the existence of a trait, there are no viable alternatives to the selected effects view.
The debate about biological functions is still as relevant and important to biology and philosophy as it ever was. Recent controversies surrounding the ENCODE Project Consortium in genetics, the nature of psychiatric classification, and the value of ecological restoration, all point to the continuing relevance to biology of philosophical discussion about the nature of functions. In philosophy, ongoing debates about the nature of biological information, intentionality, health and disease, mechanism, and even biological trait classification, are closely related to debates about biological functions.