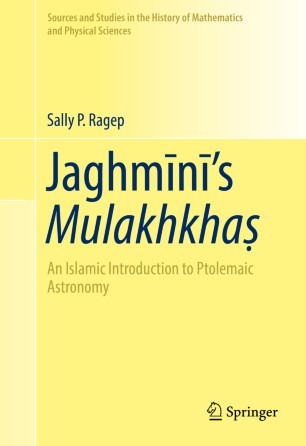 An Islamic Introduction to Ptolemaic Astronomy

This book provides the only critical edition and English translation of Maḥmūd al-Jaghmīnī’s al-Mulakhkhaṣ fī al-hayʾa al-basīṭa, the most widely circulated Arabic treatise on Ptolemaic astronomy ever written. Composed in the early 13th century, this introductory textbook played a crucial role in the teaching, dissemination, and institutional instruction of Islamic astronomy well into the 19th century (and beyond). Establishing the base text is a fundamental prerequisite for gaining insights into what was considered an elementary astronomical textbook in Islam and also for understanding the extensive commentary tradition that built upon it.

Within this volume, the Mulakhkhaṣ is situated within the broader context of the genre of literature termed ʿilm al-hayʾa, which has become the subject of intensive research over the past 25 years. In so doing, it provides a survey of summary accounts of theoretical astronomy of Jaghmīnī’s predecessors, both Ancient and Islamic, which could have served as potential sources for the Mulakhkhaṣ. Jaghmīnī’s dates (which until now remained unsettled) are established, and it is definitively shown that he composed not only the Mulakhkhaṣ but also other scientific treatises, including the popular medical treatise al-Qānūnča, during a period that has been deemed one of scientific decline and stagnation in Islamic lands. The book will be of particular interest to scholars engaged in the study of Islamic theoretical astronomy, but is accessible to a general readership interested in learning what constituted an introduction to Ptolemaic astronomy in Islamic lands.