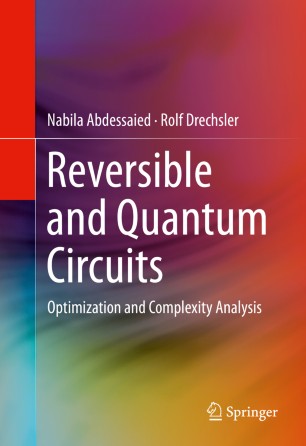 Nabila Abdessaied is a researcher at the German Research Center for Artificial Intelligence (DFKI) since 2013. She received the Diplôme d'Ingénieur in computer science from the University of sciences in Tunis, Tunisia, in 2007.  Then, she obtained her Master degree in computer science from the National Engineering School of Sousse, Tunisia, in 2009. In 2012, she joined the Institute of Computer Science of the University of Bremen where she received her Dr.-Ing. degree in computer science in 2015. Nabila Abdessaied is interested in the optimization of reversible and quantum circuits and studying their complexity. Furthermore, she is also working in the field of requirements engineering using NLP techniques.

Rolf Drechsler is head of Cyber-Physical Systems department at the German Research Center for Artificial Intelligence (DFKI) since 2011. Furthermore, he is a Full Professor at the Institute of Computer Science, University of Bremen, since 2001. Before, he worked for the Corporate Technology Department of Siemens AG, and was with the Institute of Computer Science, Albert-Ludwig University of Freiburg/Breisgau, Germany. Rolf Drechsler received the Diploma and Dr. Phil. Nat. degrees in computer science from the Goethe-University in Frankfurt/Main, Germany, in 1992 and, respectively, 1995. Rolf Drechsler focusses in his research at DFKI and in the Group for Computer Architecture, which he is heading at the Institute of Computer Science of the University of Bremen, on the development and design of data structures and algorithms with an emphasis on circuit and system design.