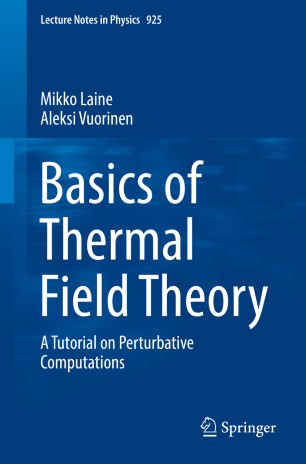 A Tutorial on Perturbative Computations

This book presents thermal field theory techniques, which can be applied in both cosmology and the theoretical description of the QCD plasma generated in heavy-ion collision experiments. It focuses on gauge interactions (whether weak or strong), which are essential in both contexts. As well as the many differences in the physics questions posed and in the microscopic forces playing a central role, the authors also explain the similarities and the techniques, such as the resummations, that are needed for developing a formally consistent perturbative expansion. The formalism is developed step by step, starting from quantum mechanics; introducing scalar, fermionic and gauge fields; describing the issues of infrared divergences; resummations and effective field theories; and incorporating systems with finite chemical potentials. With this machinery in place, the important class of real-time (dynamic) observables is treated in some detail. This is followed by an overview of a number of applications, ranging from the study of phase transitions and particle production rate computations, to the concept of transport and damping coefficients that play a ubiquitous role in current developments.

The book serves as a self-contained textbook on relativistic thermal field theory for undergraduate and graduate students of theoretical high-energy physics.