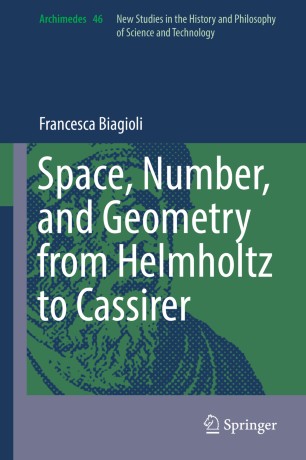 Space, Number, and Geometry from Helmholtz to Cassirer

This book offers a reconstruction of the debate on non-Euclidean geometry in neo-Kantianism between the second half of the nineteenth century and the first decades of the twentieth century. Kant famously characterized space and time as a priori forms of intuitions, which lie at the foundation of mathematical knowledge. The success of his philosophical account of space was due not least to the fact that Euclidean geometry was widely considered to be a model of certainty at his time. However, such later scientific developments as non-Euclidean geometries and Einstein’s general theory of relativity called into question the certainty of Euclidean geometry and posed the problem of reconsidering space as an open question for empirical research. The transformation of the concept of space from a source of knowledge to an object of research can be traced back to a tradition, which includes such mathematicians as Carl Friedrich Gauss, Bernhard Riemann, Richard Dedekind, Felix Klein, and Henri Poincaré, and which finds one of its clearest expressions in Hermann von Helmholtz’s epistemological works. Although Helmholtz formulated compelling objections to Kant, the author reconsiders different strategies for a philosophical account of the same transformation from a neo-Kantian perspective, and especially Hermann Cohen’s account of the aprioricity of mathematics in terms of applicability and Ernst Cassirer’s reformulation of the a priori of space in terms of a system of hypotheses. This book is ideal for students, scholars and researchers who wish to broaden their knowledge of non-Euclidean geometry or neo-Kantianism.

“Francesca Biagioli’s Space, Number, and Geometry from Helmholtz to Cassirer is a substantial and pathbreaking contribution to the energetic and growing field of researchers delving into the physics, physiology, psychology, and mathematics of the nineteenth and twentieth centuries. … It is a clear, accurate, and deep account of fascinating and philosophically momentous implications of the move to relativity theory.” (Lydia Patton, Journal for General Philosophy of Science, Vol. 50, 2019)
Buy options