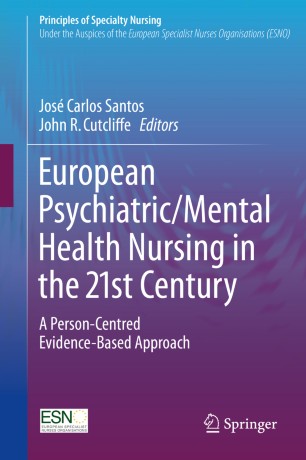 Part of the Principles of Specialty Nursing book series (PSN)

This groundbreaking book has a number of features that set it apart from other textbooks on this subject: Firstly, it focuses on interpersonal, humanistic and ecological views and approaches to P/MH nursing. Secondly, it highlights patient/client-centered approaches and mental-health-service user involvement. Lastly, it is a genuinely European P/MH nursing textbook – the first of its kind – largely written by mental health scholars from Europe, although it also includes contributions from North America and Australia/New Zealand.

Focusing on clinical/practical issues, theory and empirical findings, it adopts an evidence-based or evidence-informed approach. Each contribution presents the state-of-the-art of P/MH nursing in Europe so that it can be transferred to and implemented by P/MH nurses and the broader mental health care community around the globe. As such, it will be the first genuinely 21st century European Psychiatric Mental Health Nursing book.

José Carlos P. Santos is Coordinator Professor at the Nursing School of Coimbra in Portugal. He has a background in nursing and experience in general and psychiatric hospitals. He completed his nursing degree (1986), his mental health specialisation (1997) and his master’s degree (2000) in Coimbra, and his Doctoral degree (2006) in Oporto University.
He is a researcher of the Health Sciences Research Unit-Nursing (UICISA-E), hosted by the Nursing School of Coimbra. He is the coordinator of the project “Prevention of suicidal behaviours” with three main areas: adolescents- prevention of suicidal behaviours in schools; families-prevention of suicides with the families; professionals-guidelines and tools to prevent suicides.
He is a professor in the field of Mental Health Nursing, and he teaches in Doctoral programmes, master’s degree programs and in an undergraduate nursing degree. The main issues are related to the area of Psychiatric/Mental Health Nursing. Actually he is the coordinator of the Master programme in Psychiatry and Mental Health Nursing. He has published books, papers, chapters, abstracts/conference proceedings in Portuguese and English. He is a board member of nursing journals such as “International Journal of Mental Health”, “Referência”, “Revista de Investigação em Enfermagem” and “Revista Sinais Vitais”.
Dr. John R Cutcliffe holds the ‘Blanke Endowed Research Chair in Nursing Research’ and is the Director for the Center for Nursing Research at Wright State University, Ohio, USA. He also holds Adjunct Professor positions at the University of Ottawa, Canada, the University of Coimbra, Portugal and the University of Malta. He completed his psychiatric nurse and general nurse education in UK. His research interests focus on hope, suicide and clinical supervision and he was recognised by the federal government of Canada and cited as one of the top 20 ‘Research Leaders of Tomorrow’ for his resea
rch focusing on hope and suicidology. He has published over 210 papers/chapters, 11 books and over 90 abstracts/conference proceedings.He has over $5,000,000 dollars of extra-mural research funding as Primary/Co-Investigator and his research findings, are now found in best practice guidelines in several parts of the world. He has served as the national Canadian Representative for the International Association of Suicide Prevention and the Director of the International Society of Psychiatric Nurses: Education and Research division. He is the Associate Editor for the highest ranked Psychiatric/Mental Health Nursing Journal and is serving on the boards of 8 other health or education focused journals. And in 2012 was invited by the Director of Medicine at Yale University to join the first international advisory board on Clinical Supervision.