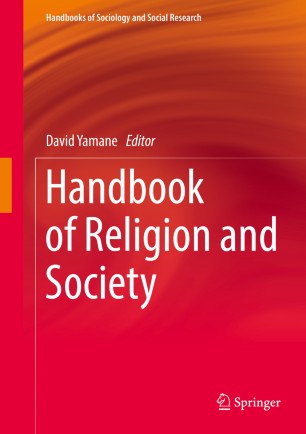 Handbook of Religion and Society

The Handbook of Religion and Society is the most comprehensive and up-to-date treatment of a vital force in the world today. It is an indispensable resource for scholars, students, policy makers, and other professionals seeking to understand the role of religion in society. This includes both the social forces that shape religion and the social consequences of religion.

This handbook captures the breadth and depth of contemporary work in the field, and shows readers important future directions for scholarship. Among the emerging topics covered in the handbook are biological functioning, organizational innovation, digital religion, spirituality, atheism, and transnationalism. The relationship of religion to other significant social institutions like work and entrepreneurship, science, and sport is also analyzed. Specific attention is paid, where appropriate, to international issues as well as to race, class, sexuality, and gender differences.

This handbook includes 27 chapters  by a distinguished, diverse, and international collection of experts, organized into 6 major sections: religion and social institutions; religious organization; family, life course, and individual change; difference and inequality; political and legal processes; and globalization and transnationalism.

David Yamane is a Professor of Sociology at Wake Forest University. Yamane’s primary scholarly interest has been in sociologically understanding organized religion, particularly Roman Catholicism in the postwar United States. His books in this area include The Catholic Church in State Politics: Negotiating Prophetic Demands and Political Realities (Rowman & Littlefield, 2005), a study of the role of conferences of Catholic bishops in state legislative politics; Real Stories of Christian Initiation: Lessons for and from the RCIA (The Liturgical Press, 2006), five case studies of the process by which individuals are initiated into the Roman Catholic church; and Becoming Catholic: Finding Rome in the American Religious Landscape (Oxford University Press, 2014).

Yamane has previously served as Editor of as of Sociology of Religion: A Quarterly Review (2006-2010) and Associate Editor of the Journal for the Scientific Study of Religion (2012-2015). He also edited Richard Schoenherr’s posthumous book, Goodbye Father: The Celibate Male Priesthood and the Future of the Catholic Church (Oxford University Press, 2002), and co-authored with Keith Roberts the 6th edition of the best-selling sociology of religion textbook Religion in Sociological Perspective (Sage Publications, 2015).

“Editor Yamane has assembled the contributions of 26 authors who assess the state of current theory and research and expand the scope of the analysis of religion and society to include discussions of racial, ethnic, gender, and class diversity in a global context. … An indispensable resource for undergraduates and advanced scholars who seek short, cogent essays that will introduce them to the subspecialties of the sociology of religion. Summing Up: Essential. All levels/libraries.” (J. H. Rubin, Choice, Vol. 54 (5), January, 2017)
Buy options