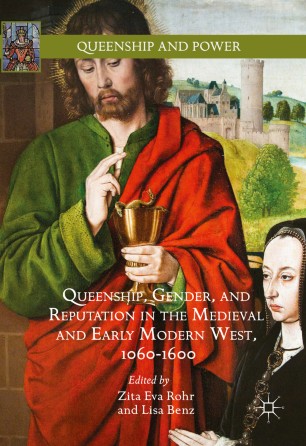 Queenship, Gender, and Reputation in the Medieval and Early Modern West, 1060-1600

This edited collection opens new ways to look at queenship in areas and countries not usually studied and reflects the increasingly interdisciplinary work and geographic range of the field. This book is a forerunner in queenship and re-invents the reputations of the women and some of the men. The contributors answers questions about the nature of queenship, reputation of queens, and gender roles in the medieval and early modern west. The essays question the viability of propaganda, gossip, and rumor that still characterizes some queens in modern histories. The wide geographic range covered by the contributors moves queenship studies beyond France and England to understudied places such as Sweden and Hungary. Even the essays on more familiar countries explores areas not usually studied, such as the role of Edward II’s stepmother, Margaret of France in Gaveston’s downfall. The chapters clearly have a common thread and the editors’ summary and description of the collection is valuable in assisting the reader. The collection is divided into two sections “Biography, Gossip, and History” and “Politics, Ambition, and Scandal.” The editors and contributors, including Zita Eva Rohr and Elena Woodacre, are scholars at the top of their field and several and engage and debate with recent scholarship. This collection will appeal internationally to literary scholars and gender studies scholars as well historians interested in the countries included in the collection.