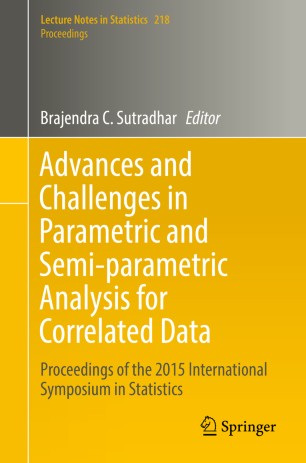 Proceedings of the 2015 International Symposium in Statistics

This proceedings volume contains eight selected papers that were presented in the International Symposium in Statistics (ISS) 2015 On Advances in Parametric and Semi-parametric Analysis of Multivariate, Time Series, Spatial-temporal, and Familial-longitudinal Data, held in St. John’s, Canada from July 6 to 8, 2015. The main objective of the ISS-2015 was the discussion on advances and challenges in parametric and semi-parametric analysis for correlated data in both continuous and discrete setups. Thus, as a reflection of the theme of the symposium, the eight papers of this proceedings volume are presented in four parts. Part I is comprised of papers examining Elliptical t Distribution Theory. In Part II, the papers cover spatial and temporal data analysis. Part III is focused on longitudinal multinomial models in parametric and semi-parametric setups. Finally Part IV concludes with a paper on the inferences for longitudinal data subject to a challenge of important covariates selection from a set of large number of covariates available for the individuals in the study.

Brajendra C. Sutradhar is an Honorary Research Professor at Memorial University, St. John's, and an Adjunct Research Professor at Carleton University in Ottawa, Canada. He is also a University Research Professor. This University Research Professor title was awarded to him by Memorial University in 2004 for his outstanding research in Statistical Science. Memorial University confers this prestigious title to at most two professors in any one year. Professor Sutradhar has published 126 papers in statistics journal in the area of familial and longitudinal data analysis with bio-statistical and econometric applications, multivariate estimation theory, time series analysis in both continuous and discrete setups, and complex sampling estimation theory for longitudinal survey data. He has served for 3 years as a member of the advisory committee on statistical methods in Statistics Canada. He has served as an associate editor for six years for Canadian Journal of Statistics and for four years for the Journal of Environmental and Ecological Statistics. He is an elected member of the International Statistical Institute and a fellow of the American Statistical Association. Professor Sutradhar was awarded 2007 distinguished service award of Statistics Society of Canada for his many years of services to the society including his special services for society's annual meetings.