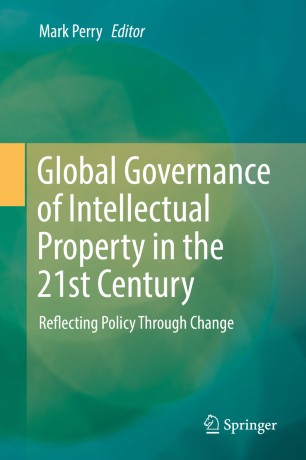 Global Governance of Intellectual Property in the 21st Century

This book analyses the governance foundations of innovation, brands, inventions, secrets and expression, which are the keys to a century based on knowledge. They are reflected in legal rights that have been fermenting over centuries of national policy deliberations on intellectual property rights, constantly in flux in the face of new advances in science, but overall a trend towards greater protectionism. As countries are challenged by the strictures of international agreements, often extorted through imbalanced power relationships, they seek their own national means for beneficial differentiation from the new global norms, whilst complying with international obligations. This book deals with the outcomes of regional governance of intellectual property, which often creates ripples in the search for harmony in the laws that form the basis for the future of intellectual property. The work has contributions that come from developing and developed nations, showing a common theme of the struggle to find the balance in an area of law that often does not provide clearcut solutions to real world environments.

There are many intellectual property struggles illustrated in this work: patent at the boundaries of nature and invention, the need for drug development, which is driven by profit based on the patent monopoly; copyright, the expression of original thought, seeking to maximise exposure facilitated by the internet, but a system that facilitates rampant copying; trade marks, supporting company branding, seeks to exploit global branding through naming domains names; and other areas concomitant to the globalisation of intellectual property governance, such as foreign direct investment. This book holds up a mirror to the issues of world governance of intellectual property rights in this century, asking whether the direction we are currently following is in the best interest of global citizens, and showing the divergence that constraints are stimulating on a national level.

Mark Perry is Professor of Law at the University of New England, Australia and Barrister and Solicitor of the Law Society of Upper Canada. He is also Professor Emeritus of Computer Science at Western University in Canada. His research is on the nexus of Science and Law, in particular focussing on biotechnology and intellectual property. Professor Perry has prelected audiences around the world, including Brasil, China, India, Japan, New Zealand, the United States, United Kingdom and Australia. He has been an invited and keynote speaker at many international conferences regarding technology and law. Along with invitations to speak, he has organised several global conferences in Canada, Australia and China, and been an advisor on other symposia overseas. Professor Perry has published widely in both law and technology journals, and has supervised many post doctoral, graduate and undergraduate students, who have gone on to work at law firms, industry, non-governmental organisations or taken positions in universities.