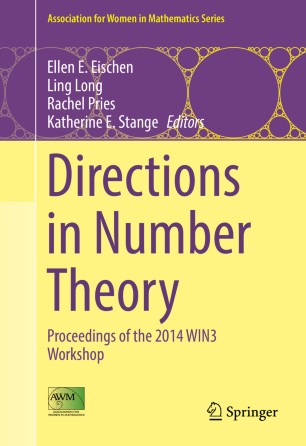 Proceedings of the 2014 WIN3 Workshop

Part of the Association for Women in Mathematics Series book series (AWMS, volume 3)

Exploring the interplay between deep theory and intricate computation, this volume is a compilation of research and survey papers in number theory, written by members of the Women In Numbers (WIN) network, principally by the collaborative research groups formed at Women In Numbers 3, a conference at the Banff International Research Station in Banff, Alberta, on April 21-25, 2014. The papers span a wide range of research areas: arithmetic geometry; analytic number theory; algebraic number theory; and applications to coding and cryptography.
The WIN conference series began in 2008, with the aim of strengthening the research careers of female number theorists. The series introduced a novel research-mentorship model: women at all career stages, from graduate students to senior members of the community, joined forces to work in focused research groups on cutting-edge projects designed and led by experienced researchers. The goals for Women In Numbers 3 were to establish ambitious new collaborations between women in number theory, to train junior participants about topics of current importance, and to continue to build a vibrant community of women in number theory. Forty-two women attended the WIN3 workshop, including 15 senior and mid-level faculty, 15 junior faculty and postdocs, and 12 graduate students.