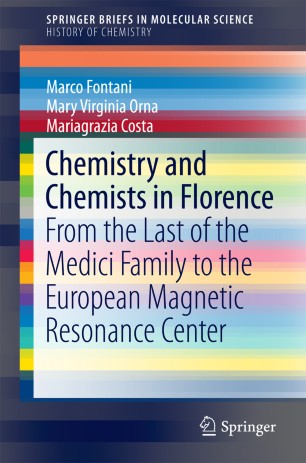 This brief offers a novel vision of the city of Florence, tracing the development of chemistry via the biographies of its most illustrious chemists. It documents not only important scientific research that came from the hands of Galileo Galilei and the physicists who followed in his footsteps, but also the growth of new disciplines such as chemistry, pharmaceutical chemistry, and biochemistry. It recounts how, in the Middle Ages, chemistry began as an applied science that served to bolster the Florentine economy, particularly in the textile dyeing industry. Later, important scientific collections founded by the ruling Medici family served as the basis of renowned museums that now house priceless artifacts and instruments. Also described in this text are the chemists such as Hugo Schiff, Angelo Angeli, and Luigi Rolla, who were active over the course of the following century and a quarter. The authors tell the story of the evolution of the Royal University of Florence, which ultimately became the University of Florence. Of interest to historians and chemists, this tale is told through the lives and work of the principal actors in the university’s department of chemistry.

Marco Fontani has been working at the Department of Organic Chemistry at the University of Florence since 2003. He is the author of over 120 publications in materials chemistry, organometallic chemistry, electrochemistry and the history of chemistry. He is a member of the National Society of History of Chemistry (Gruppo Nazionale di Storia e Fondamenti della Chimica).

Mary Virginia Orna is Professor of Chemistry at the College of New Rochelle, NY. She has lectured and published widely in the areas of color chemistry and archaeological chemistry and, following a sabbatical leave at the Institute of Fine Arts, New York University, she has maintained a research relationship with art historians in the area of pigment content of medieval manuscripts. She has authored numerous  journal articles, book chapters and encyclopedia articles, four books and edited nine others. She is active in several divisions of the American Chemical Society, having served as Chair, Program Chair and Treasurer of the Division of the History of Chemistry. She is the author of The Chemical History of Color (Springer: Heidelberg, 2013).

Mariagrazia Costa has been associated with the Laboratory for Educational Research in Teaching Chemistry and Integrated Science, of the Department of Chemistry, University of Florence, since 1986. She is a member of the Gruppo Nazionale di Storia e Fondamenti della Chimica (National Group of History and Fundamentals of Chemistry) and authored or co-authored approximately 215 publications and 10 audiovisual works.