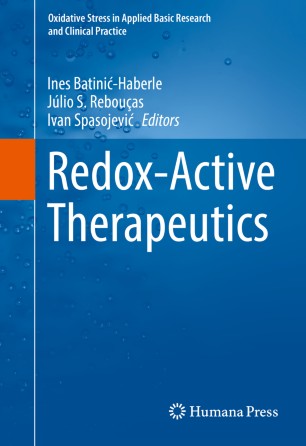 This essential volume comprehensively discusses redox-active therapeutics, focusing particularly on their molecular design, mechanistic, pharmacological and medicinal aspects.  The first section of the book describes the basic aspects of the chemistry and biology of redox-active drugs and includes a brief overview of the redox-based pathways involved in cancer (such as the role of mitochondria, hydrogen peroxide and endogenous antioxidative defenses) and the medical aspects of redox-active drugs, assuming little in the way of prior knowledge. The second section encompasses several major classes of redox-active experimental therapeutics, which include porphyrins, salens, nitrones, and other metal-containing (e.g., Mn, Fe, Cu, Zn, Sb) drugs as either single compounds or formulations with nanomaterials and quantum dots. Subsequent sections and chapters describe more specialized aspects of redox-active therapeutics in clinical disorders, such as cancer, cardiovascular diseases, diabetes, central nervous system injuries, neurodegenerative diseases, pain, radiation injury and radioprotection (such as of brain, lungs, head and neck and erectile function) and neglected diseases (e.g., leishmaniasis). Numerous illustrations, tables and figures enhance and complement the text; extensive references to relevant literature are also included.

Redox-Active Therapeutics is an invaluable addition to Springer’s Oxidative Stress in Applied Basic Research and Clinical Practice series.  It is essential reading for researchers, clinicians and graduate students interested in understanding and exploring the Redoxome—the organism redox network—as an emerging frontier in drug design, redox biology and medicine.

Ines Batinic-Haberle is a Professor of Radiation Oncology at the Department of Radiation Oncology, Duke University School of Medicine. She received her B.Sc. in Food Chemistry, M.Sc. degree in Analytical Chemistry, and her Ph.D. degree in Bioinorganic Chemistry from the School of Pharmacy and Biochemistry, University of Zagreb, Croatia. She completed her postdoctoral education at the Department of Chemistry, Duke University. She then moved to the Department of Biochemistry at Duke University School of Medicine, where she was trained by Irwin Fridovich, the Father of the field of Free Radicals in Biology and Medicine. She spent 10 years in Fridovich’s Lab where she acquired the basis of her expertise in Oxidative Stress and Redox-Active Therapeutics and launched the design of powerful Mn porphyrin-based SOD mimics.  She established the structure-activity relationship for Mn porphyrin-based SOD mimics, which she subsequently extended to all classes of SOD mimics. She holds a number of compositional and methods of use patents on metalloporphyrins; her lead compounds are either already in or entering Clinical Trials in 2016. She authored more than 190 manuscripts, several book chapters, has served as Guest/Invited Editor and reviewer of various prestigious journals and granting agencies both nationally and internationally. For the last 6 years she has served as a Society for Redox Biology and Medicine (SFRBM) Officer and is a founding member of the Society of Porphyrins and Phthalocyanines. She was recently awarded the SFRBM Excellence in Mentoring Award. She has organized numerous Symposia nationally and internationally and gave lectures at numerous Universities in the USA and abroad. She has established numerous collaborations with research groups in USA and internationally and worked actively in advancing metalloporphyrins towards clinic.

Julio S. Reboucas is an Adjunct Professor at Universidade Federal da Paraiba (UFPB, Brazil), Adjunct Head of the UFPB Chemistry Graduate Programs, and Fellow of the Brazilian National Research Council (CNPq). He received his Chemical Engineering B.Sc. and Chemistry M.Sc. degrees from Universidade Federal de Minas Gerais (Brazil) and his Chemistry Ph.D. degree from the University of British Columbia (Canada). He joined the Batinic-Haberle and Spasojevic Laboratories at Duke University (USA) in 2006, where he completed his postdoctoral training in oxidative stress and porphyrin-based redox-active therapeutics, before moving to UFPB in 2009 to establish an accredited porphyrin research group. His research spans the fields of medicinal and inorganic chemistry, with emphasis on porphyrin-based biomimetic systems. He has co-authored 52 manuscripts, two book chapters, and has one patent application. He is a founding member of the Society of Porphyrins and Phthalocyanines and currently serves as the elected Inorganic Chemistry Division secretary of the Brazilian Chemical Society. Among his honors and awards is receiving the Young Investigator Award by the Society for Redox Biology and Medicine. He has collaborated with various groups within Brazil and abroad on porphyrin chemistry and medicine.

Ivan Spasojevic is an Assistant Professor of Medicine at the Department of Medicine, Division of Oncology. He is also a Director of the PK/PD Core Lab of Duke Cancer Institute Pharmaceutical Research Shared Resource, an NCI-supported state-of-the-art bioanalytical facility providing study design and modeling expertise in pharmacokinetics/pharmacodynamics (PK/PD) and performing analysis of drugs and their metabolites, oxidative stress markers and other small biomolecules in general. His Lab has provided the invaluable support in the development of Mn porphyrins towards Clinical Trials. Ivan earned his B.Sc. degree in Chemical Engineering from the School of Chemical Engineering, Zagreb, Croatia and his Ph.D. Degree in Bioinorganic Chemistry from the Department of Chemistry, Duke University. He completed his postdoctoral training with Irwin Fridovich in the field of Oxidative stress and Free Radicals in Biology and Medicine and started his work on the design of Mn porphyrin-based SOD mimics. He has co-authored 126 manuscripts including several Book Chapters, has several compositional and method of use patents and patent applications. He has served as Guest/Invited Editor and reviewer of various prestigious journals and was invited speaker/organized symposia at National and International Meetings. He is a founding member of the Society of Porphyrins and Phthalocyanines. He has collaborated with numerous groups in and outside of USA in the field of drug development and pharmacokinetics.