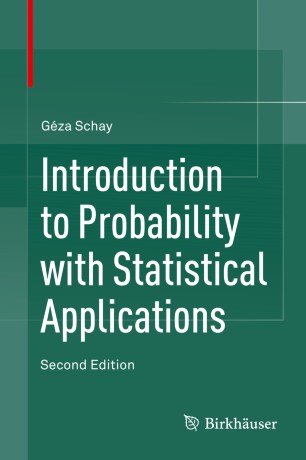 Introduction to Probability with Statistical Applications

Now in its second edition, this textbook serves as an introduction to probability and statistics for non-mathematics majors who do not need the exhaustive detail and mathematical depth provided in more comprehensive treatments of the subject. The presentation covers the mathematical laws of random phenomena, including discrete and continuous random variables, expectation and variance, and common probability distributions such as the binomial, Poisson, and normal distributions. More classical examples such as Montmort's problem, the ballot problem, and Bertrand’s paradox are now included, along with applications such as the Maxwell-Boltzmann and Bose-Einstein distributions in physics.

* Expanded section on the algebra of sets

* Expanded chapters on probabilities to include more classical examples

This textbook is a classical and well-written introduction to probability theory and statistics. … the book is written ‘for an audience such as computer science students, whose mathematical background is not very strong and who do not need the detail and mathematical depth of similar books written for mathematics or statistics majors.’ … Each new concept is clearly explained and is followed by many detailed examples. … numerous examples of calculations are given and proofs are well-detailed." (Sophie Lemaire, Mathematical Reviews, Issue 2008 m)

Geza Schay is Professor Emeritus at the University of Massachusetts, Boston, College of Science and Mathematics.

“Schay (emer., Univ. of Massachusetts) has created a text for a two semester, calculus-based course in mathematical statistics. … The prose reads well. Physical production is good. … Summing Up: Recommended. Upper-division undergraduates and graduate students.” (W. R. Lee, Choice, Vol. 54 (6), February, 2017)
“I believe that students concentrating in mathematics and related subjects will find this book readable and interesting. … I think that students learning the probability for the first time will get real value out of working through the examples and exercises of the text. … Introduction to Probability with Statistical Applications is very clearly written and reading the book is enjoyable. I would certainly recommend Schay’s book as a primary textbook for an undergraduate course in calculus-based probability.” (Jason M. Graham, MAA Reviews, September, 2016)
Buy options