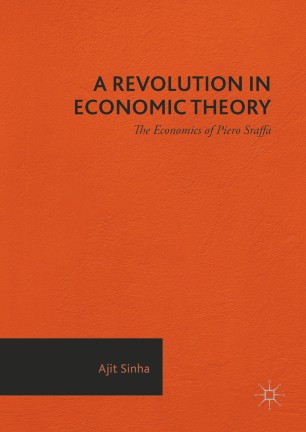 A Revolution in Economic Theory

The Economics of Piero Sraffa

'Drawing extensively on Sraffa's Cambridge archives, particularly his unpublished notes, Ajit Sinha reveals Sraffa's struggle – philosophical, methodological and technical – on the road towards the brief formulation in Production of Commodities by Means of Commodities (1960). Sinha puts paid thereby to alternative readings of that enigmatic work, including that of the late Pierangelo Garegnani, Sraffa's student and the leading Sraffian commentator. Sinha's concern with the philosophical underpinnings of the discipline and his dissatisfaction with technicality for its own sake reflect a broadness of intellectual vision that would serve well any economics program taking the history of thought seriously.'
– Samuel Hollander, Professor Emeritus, University of Toronto, Canada, and Officer of the Order of Canada
'The two main features of Ajit Sinha's book show the fundamental nature of its contribution to economic analysis and history of economic thought. On the one hand, the author offers a complete and thorough reconstruction and interpretation of Sraffa's works, including his unpublished papers. On the other hand, it strongly contributes to the recent revival of the economists' debates on the meaning of Sraffa's contribution to economics, especially and unusually stressing the importance of its philosophical underpinnings.'
– Richard Arena, Professor of Economics, University of Nice Sophia Antipolis, France
This book draws on the work of one of the sharpest minds of the 20th century, Piero Sraffa. Ludwig Wittgenstein credited him for 'the most consequential ideas' of the Philosophical Investigations (1953) and put him high on his short list of geniuses. Sraffa's revolutionary contribution to economics was, however, lost to the world because economists did not pay attention to the philosophical underpinnings of his economics. Based on exhaustive archival research, Sinha presents an exciting new thesis that shows how Sraffa challenged the usual mode of theorizing in terms of essential and mechanical causation and, instead, argued for a descriptive or geometrical theory based on simultaneous relations. A consequence of this approach was a complete removal of 'agent's subjectivity' and 'marginal method' or counterfactual reasoning from economic analysis – the two fundamental pillars of orthodox economic theory.