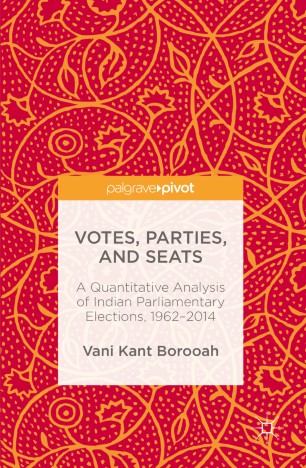 'This starkly lucid and timely book absorbs the nuances of the largest festival – the elections – of the world's largest democracy. Hailing from a political family, the author conveys his passion and knowledge on the intricacies, as well as the heat and dust of his national fête. All data and events have been methodically examined in this absorbing analytical work which is an indispensable and scholarly book on the Indian elections.'
– Thankom Arun, Professor at the University of Essex, UK
This book provides a quantitative analysis of eight elections and an insight into voting patterns, detailing the election result for each candidate, for all the constituencies, in every Lok Sabha (the lower house of India's Bicameral-Parliament) general election from 1962 to 2014. The central purpose of this interrogation of data is to give shape to the notion of 'electoral efficiency', or the capacity of a part to convert votes into parliamentary seats. Parlia
mentary elections in India – and also elections to its state assemblies – are conducted under the First Past the Post (FPTP) system whereby a single representative for each of the 543 constituencies is elected as a Member of the Lok Sabha, on the basis of obtaining the largest number of all the candidates contesting that constituency. In brief, Votes, Parties, and Seats provides an in-depth study of the results of parliamentary general elections in India, and sheds light on why some parties are more efficient than others.

Vani Kant Borooah is Emeritus Professor at Ulster University, Northern Ireland, UK, having held the Chair in Applied Economics there from 1987 to 2013. After receiving his PhD in 1977 from the University of Southampton, UK, he worked as a Senior Research Officer at the University of Cambridge's Department of Applied Economics and, concurrently, was a Fellow of Queens' College, Cambridge, UK. His research areas include unemployment, inequality, poverty, and economic development. His most recent publications are Europe in an Age of Austerity (Palgrave Macmillan, 2014); Caste, Discrimination, and Exclusion in Modern India (2015); and Education in a Divided Society (Palgrave Macmillan, 2015).

“This is a remarkable book, reflecting the author’s wide-ranging expertise of political economy in general and India’s complex election process in particular. … This book … deserves to be welcomed as a very detailed and systematic study encompassing all the national elections since Independence … . I think the book stands out as a trend-setter in the field of applied political economy.” (Dilip M. Nachane, Journal of Quantitative Economics, May, 2017)
Buy options