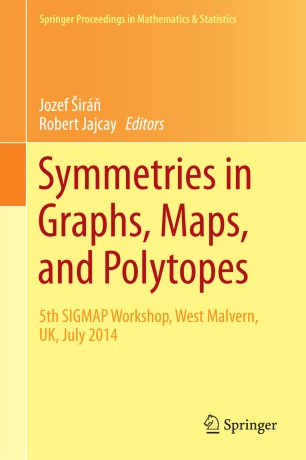 Symmetries in Graphs, Maps, and Polytopes

This volume contains seventeen of the best papers delivered at the SIGMAP Workshop 2014, representing the most recent advances in the field of symmetries of discrete objects and structures, with a particular emphasis on connections between maps, Riemann surfaces and dessins d’enfant.
Providing the global community of researchers in the field with the opportunity to gather, converse and present their newest findings and advances, the Symmetries In Graphs, Maps, and Polytopes Workshop 2014 was the fifth in a series of workshops. The initial workshop, organized by Steve Wilson in Flagstaff, Arizona, in 1998, was followed in 2002 and 2006 by two meetings held in Aveiro, Portugal, organized by Antonio Breda d’Azevedo, and a fourth workshop held in Oaxaca, Mexico, organized by Isabel Hubard in 2010.
This book should appeal to both specialists and those seeking a broad overview of what is happening in the area of symmetries of discrete objects and structures.