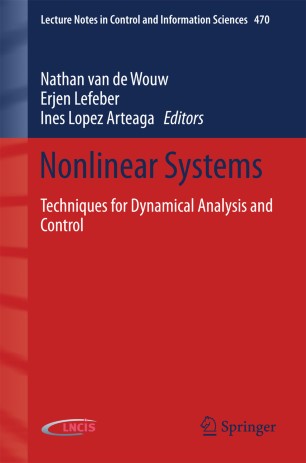 Techniques for Dynamical Analysis and Control

This treatment of modern topics related to the control of nonlinear systems is a collection of contributions celebrating the work of Professor Henk Nijmeijer and honoring his 60th birthday. It addresses several topics that have been the core of Professor Nijmeijer’s work, namely: the control of nonlinear systems, geometric control theory, synchronization, coordinated control, convergent systems and the control of underactuated systems. The book presents recent advances in these areas, contributed by leading international researchers in systems and control. In addition to the theoretical questions treated in the text, particular attention is paid to a number of applications including (mobile) robotics, marine vehicles, neural dynamics and mechanical systems generally.

This volume provides a broad picture of the analysis and control of nonlinear systems for scientists and engineers with an interest in the interdisciplinary field of systems and control theory. The reader will benefit from the expert participants’ ideas on important open problems with contributions that represent the state of the art in nonlinear control.

Contributions in this book celebrate the work of Professor Henk Nijmeijer and honor his 60th birthday
Henk Nijmeijer was born in 1955. He received the M.Sc. degree and the Ph.D. degree in mathematics from the University of Groningen, Groningen, The Netherlands, in 1979 and 1983, respectively. He
was with the Department of Applied Mathematics, University of Twente, Enschede, The Netherlands, from 1983 to 2000. Since 1997, he has been with the Department of Mechanical Engineering, Eindhoven University of Technology, Eindhoven, The Netherlands. Since 2000, he has been a Full Professor with the Eindhoven University of Technology, where he chairs the Dynamics and Control Section.
He has authored a large number of journal and conference papers, and several books, including the Nonlinear Dynamical Control Systems (Springer, 1990), with A. J. van der Schaft, Synchronization of Mechanical Systems (World Scientific, 2003), with A. Rodriguez, Dynamics and Bifurcations of Non-Smooth Mechanical Systems (Springer-Verlag, 2004), with R. I. Leine, and Uniform Output Regulation of Nonlinear Systems (Birkhauser, 2005), with A. Pavlov and N. van de Wouw.
Prof. Nijmeijer has been a Board Member of the Dutch Institute on Systems and Control (DISC) since 1990 and since 2015 he serves as the scientific director of DISC. He is a Council Member of the International Federation of Automatic Control, and is/has been the Organizer and/or IPC Chair of numerous international conferences and workshops. He is an Editor of the Communications on Nonlinear Systems and Numerical Simulation, a Corresponding Editor of the SIAM Journal on Control and Optimization, and a Board Member of the International Journal of Control, Automatica, the Journal of Dynamical Control Systems, the International Journal of Bifurcation and Chaos, International Journal of Robust and Nonlinear Control, Journal of Nonlinear Dynamics, and the Journal of Applied Mathematics and Computer Science.
Henk Nijmeijer was a recipient of the IEE Heaviside Premium Award in 1990 and became an IEEE Fellow in 2000, ‘For contributions to the theory and application of nonlinear control system design’. He received the 2004-2005 best paper award of the IEEE Transactions on Control Systems Technology. He is currently an Honorary Knight of the Golden Feedback Loop at the Norwegian University of Science and Technology, Trondheim, Norway.