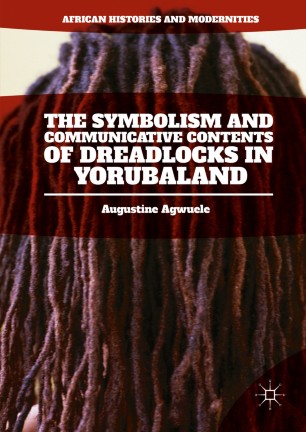 The Symbolism and Communicative Contents of Dreadlocks in Yorubaland

This book offers an interpretation of Yoruba people’s affective responses to an adult Yoruba male with a ‘deviant’ hairstyle. The work, which views hairstyles as a form of symbolic communicative signal that encodes messages that are perceived and interpreted within a culture, provides an ontological and epistemological interpretation of Yoruba beliefs regarding dreadlocks with real-life illustrations of their treatment of an adult male with what they term irun were (insane person’s hairdo). Based on experiential observations as well as socio-cultural and linguistic analyses, the book explores the dynamism of Yoruba worldview regarding head-hair within contemporary belief systems and discusses some of the factors that assure its continuity. It concludes with a cross-cultural comparison of the perceptions of dreadlocks, especially between Nigerian Yoruba people and Afr

Augustine Agwuele is an Associate Professor of Anthropology at Texas State University, USA. He combines the conceptual rigors of theoretical linguistics with ethnographically grounded scholarship in socio-cultural anthropology to study peoples and cultures of Africa. At the core of his works is the quest to make sense of variabilities associated with the production of speech segments (phonetics) and to uncover the fulcrum of a people’s perception of, and response to, life persistent concerns (socio-cultural studies).