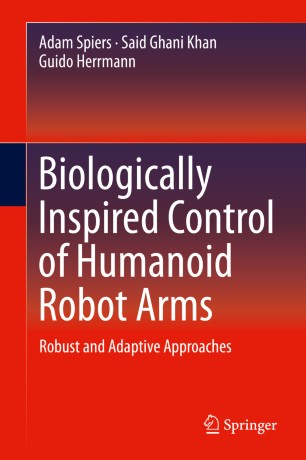 This book investigates a biologically inspired method of robot arm control, developed with the objective of synthesising human-like motion dynamically, using nonlinear, robust and adaptive control techniques in practical robot systems. The control method caters to a rising interest in humanoid robots and the need for appropriate control schemes to match these systems. Unlike the classic kinematic schemes used in industrial manipulators, the dynamic approaches proposed here promote human-like motion with better exploitation of the robot’s physical structure. This also benefits human-robot interaction.

The control schemes proposed in this book are inspired by a wealth of human-motion literature that indicates the drivers of motion to be dynamic, model-based and optimal. Such considerations lend themselves nicely to achievement via nonlinear control techniques without the necessity for extensive and complex biological models.

The operational-space method of robot control forms the basis of many of the techniques investigated in this book. The method includes attractive features such as the decoupling of motion into task and posture components. Various developments are made in each of these elements. Simple cost functions inspired by biomechanical “effort” and “discomfort” generate realistic posture motion. Sliding-mode techniques overcome robustness shortcomings for practical implementation. Arm compliance is achieved via a method of model-free adaptive control that also deals with actuator saturation via anti-windup compensation. A neural-network-centered learning-by-observation scheme generates new task motions, based on motion-capture data recorded from human volunteers. In other parts of the book, motion capture is used to test theories of human movement. All developed controllers are applied to the reaching motion of a humanoid robot arm and are demonstrated to be practically realisable.

This book is designed to be of interest to those wishing to achieve dynamics-based human-like robot-arm motion in academic research, advanced study or certain industrial environments. The book provides motivations, extensive reviews, research results and detailed explanations. It is not only suited to practising control engineers, but also applicable for general roboticists who wish to develop control systems expertise in this area.

Dr. Adam (‘Ad’) Spiers is an Associate Research Scientist at the GRAB lab in Yale University (Connecticut, USA). The majority of this book represents research he carried out for his PhD (2007-2011) at the Bristol Robotics Laboratory (BRL) and University of Bristol (UK) under the supervision of Dr. Guido Herrmann and Prof. Chris Melhuish. In addition to a PhD, he holds an MSc in Engineering and Information Sciences (2006) and BSc in Cybernetics and Control Engineering (2004), both from the University of Reading (UK). He currently conducts research into human movement, upper limb prosthetics, underactuated robot hands and shape-changing haptic navigation interfaces for pedestrian guidance. His other research work, outside that noted in this book, has included surgical robotics, tele-haptics, medical diagnostic simulators, robot gripper / sensor development, tactile displays, neural interfacing and enactive interfaces. He has also worked on remote handling robots at UK nuclear facilities and collaborated with several artists to create unique technology driven theater and art installations. He was an invited resident of the Pervasive Media Studio (Bristol, UK) from 2012-2014.
Dr Said G Khan is an Assistant Professor in Robotics and Control in the Department of Mechanical Engineering, College of Engineering Yanbu, Taibah University Al Madinah, Saudi Arabia. He has previously worked as a postdoctoral researcher at the Department of Mechanical Engineering, Queen's School of Engineering, University of Bristol. Dr. S G Khan is a member of the Nonlinear Robotics Control Group (NRCG) at the Bristol Robotics Laboratory. He has completed his PhD at the Bristol Robotics Laboratory, University of the West of England (and University of Bristol) in 2012 in Robotics and Control, specializing in “safe human-robot interaction via adaptive compliance control”. He did his M.Sc. Robotics with Distinction from the University Of Plymouth, UK in 2006. He received his B.Sc. in Mechanical Engineering, First Division with Honours, from University of Engineering Technology (UET) Peshawar, Pakistan in October, 2003. He was a part-time lecturer in University of the West of England, Bristol, from September 2008 to October, 2011, and a Research Associate at Department of Mechanical Engineering, GIK Institute of Engineering Sciences and Technology, Pakistan, from March 2007 to July 2008.
Dr. Guido Herrmann is an accomplished control engineer and a Reader in Control and Dynamics at the University of Bristol with extensive experience in the development and implementation of novel control schemes for industrially relevant systems. He received the German degree 'Diplom-Ingenieur der Elektrotechnik' (with highest honours) from the Technische Universität zu Berlin. In 2001, he obtained a PhD from the University of Leicester. From 2001 to 2003, he worked in the mechatronics and micro-systems group of the A*Star Data Storage Institute (Singapore) doing research and consultancy for the data storage industry. From 2003 until February 2007, he was a Research Associate, Research Fellow and a Lecturer in the Department of Engineering at Leicester University. In March 2007, Dr Herrmann took up a permanent lecturing position at the Department of Mechanical Engineering of the University of Bristol. He was at several occasions a Visiting Lecturer and a Visiting Professor in Malaysia and Singapore; in September 2005, he was a Visiting Professor at the Data Storage Institute. He is leading the Nonlinear Robotics Control Group (NRCG) at the Bristol Robotics Laboratory. He is a Senior Member of the IEEE and a Fellow of the IET. He has been an Associate Editor of the International Journal of Social Robotics (since foundation in 2009) and a Technical Editor of the IEEE/ASME Transactions on Mechatronics (2009/2010-2014/2015 editorial cohort).