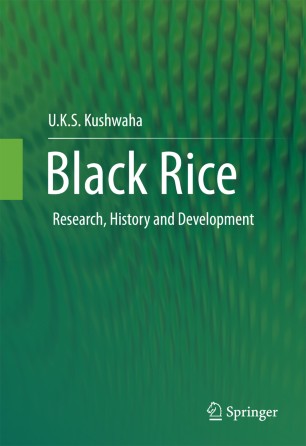 This book introduces black rice to a wider circle of interested parties. Although there have been research on different aspects of black rice, the information is scattered and not easily accessible to laypersons. The book covers all the aspects of black rice from research, history, to its development. As such, the book is suitable for both rice researchers and non-professionals who want to know more about this unique rice crop.

Black rice, also known as forbidden rice, is packed with high level of nutrients and antioxidants. The antioxidants found in black rice is higher than the blueberries (that contain highest amount of anthocyanins). Black rice is black due to anthocyanin content in the outer layer of its kernel. Legend tells that this rice was consumed only by royals in China and it was expected that this rice would increase life span of the king. Consumption of black rice without approval was hanged. Ordinary individuals were not allowed to consume black rice. Thus this rice is also known as forbidden rice and Emperor’s rice. Now this black heirloom rice is widely available in different parts of the world. Researchers have found that black rice reduce Reactive Oxygen Species (ROS), the free radicals produced in the body which is the cause of many diseases. This rice also reduce diabetes, inflammation, heart attack, allergy and obesity; reduce the growth of cancer, improves digestive system and is panacea of many health problems. Thus this rice is also known as long life rice. Food nutritionists consider black rice as modern super foods. The cultivation method of black rice is similar to general rice cultivation practices. There are many varieties available in black rice which is of different Asian origin but Chinese black rice is the most famous among them. Black rice has a wide range of applications because its bran is used as a natural food colouring dye, and it is also used to prepare noodles, pasta, porridge, wine etc. This rice takes slightly longer time to cook than widely available white rice. In modern era, black rice serve as one of the best food materials available to us to maintain our health with regular physical exercise.