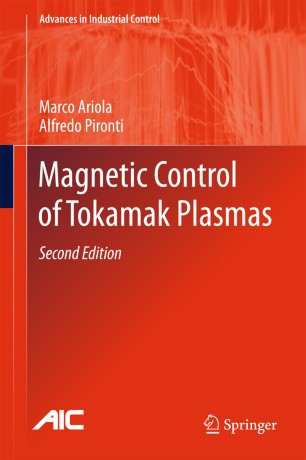 This book is a complete treatment of work done to resolve the problems of position-, current-, and shape-control of plasma in tokamak-type (toroidal) devices being studied as a potential means of commercial energy production by nuclear fusion. Modelling and control are both detailed, allowing non-expert readers to understand the control problem. Starting from the magneto-hydro-dynamic equations, all the steps needed for the derivation of plasma state-space models are enumerated with frequent recall of the basic concepts of electromagnetics. The control problem is then described, beginning with the control of current and position—vertical and radial—control and progressing to the more challenging shape control. The solutions proposed vary from simple PIDs to more sophisticated MIMO controllers.
The second edition of Magnetic Control of Tokamak Plasmas contains numerous updates and a substantial amount of completely new material covering areas such as:
Whenever possible, coverage of the various topics is rounded out with experimental results obtained on currently existing tokamaks. The book also includes a presentation of  the typical actuators and sensors used for control purposes in tokamaks. Some mathematical details are given in the appendices for the interested reader.
The ideas formulated in this monograph will be of great practical help to control engineers, academic researchers and graduate students working directly with problems related to the control of nuclear fusion. They will also stimulate control researchers interested more generally in the advanced applications of the discipline.
Advances in Industrial Control aims to report and encourage the transfer of technology in control engineering. The rapid development of control technology has an impact on all areas of the control discipline. The series offers an opportunity for researchers to present an extended exposition of new work in all aspects of industrial control.

Marco Ariola was born in Naples, Italy, in 1971. He received the Laurea degree in electronic engineering and the Research Doctorate degree in electronic engineering and computer science from the University of Naples Federico II, Naples, Italy, in 1995 and 2000, respectively. From 1996 to 2005 he was with the Department of Computer and Systems Engineering of the University of Naples Federico II. Currently, he is a full Professor of Automatic Control at the University of Naples Parthenope in the Engineering Department. From September 1998 to February 1999, he was a Visiting Scholar with the Department of Electrical & Computer Engineering of University of New Mexico, Albuquerque, NM, USA. His research interests include statistical control, robust control, control of nuclear fusion devices, control of aerospace systems. He has published more than 150 journal papers, conference papers, articles in books and encyclopedias. He is co-author of the books “Magnetic Control of Tokamak Plasmas” and “Finite-Time Stability and Control” published by Springer in 2008 and 2013. He is a senior member of the IEEE.
Professor Alfredo Pironti received the Laurea degree cum Laude in Electronic Engineering, and the PhD in Electronic and Computing Engineering from the University of Naples Federico II in 1991 and 1995, respectively. Since 1991 he works at the University of Naples Federico II, where he currently is a Full Professor of System and Control Theory in the Department of Electrical and Information Technology Engineering. He has spent several periods as visiting researcher at the Max Planck Institute for Plasma Physics in Garching (Germany), the Center for Control Engineering and Computation (University of California at Santa Barbara), the ITER Joint Work Site of Naka (Japan), and the EFDA-JET site of Culham (UK). His research interests include application of feedback control to nuclear fusion problems, robust control of uncertain systems, and differential games theory. In 2005 Alfredo Pironti has been guest editor for the IEEE Control Systems Magazine journal, where he has contributed to two special issues focused on the control of plasmas in tokamak machines. In 2008 he has co-authored the book "Magnetic Control of Tokamak Plasmas" published by Springer. He contributes to the IEEE CSS Technical Committee on Power Generation, co-chairing the thrust on Nuclear Energy Generation. He is author of more than 200 papers published on international journals, books, and conference proceedings.