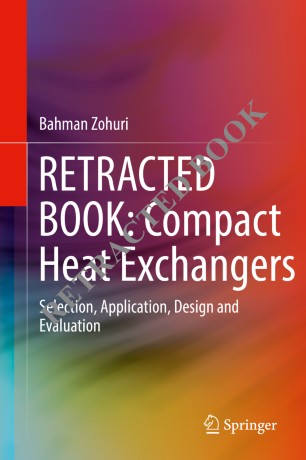 ·       Discusses the types of compact heat exchanger surfaces, suggesting novel designs that can be considered for optimal cost effectiveness and maximum energy production

·       Undertakes the thermal analysis of these compact heat exchangers throughout the life cycle, from the design perspective through operational and safety assurance stages

This book describes the fundamentals and applications of compact heat exchangers in energy generation. The text focuses on their efficiency impacts on power systems, particularly emphasizing alternative energy sources such as Concentrated Solar Power and nuclear plants.

The various types of compact heat exchanger surfaces and designs are given thorough consideration before the author turns his attention to describing how these compact heat exchangers can be applied to innovative plant designs, and how to conduct operational and safety analyses to optimize thermal efficiency. The book is written at an undergraduate level, but will be useful to practicing engineers and scientists as well.

Dr. Bahman Zohuri is founder of  Galaxy Advanced Engineering, Inc. a consulting company that he formed upon leaving the semiconductor and defense industries after many years as a Senior Process Engineer for corporations including Westinghouse and Intel, and then as Senior Chief Scientist at Lockheed Missile and Aerospace Corporation . During his time with Westinghouse Electric Corporation, he performed thermal hydraulic analysis and natural circulation for Inherent Shutdown Heat Removal System (ISHRS) in the core of a Liquid Metal Fast Breeder Reactor (LMFBR). While at Lockheed, he was responsible for the study of vulnerability, survivability and component  radiation and laser hardening for Defense Support Program (DSP), Boost Surveillance and Tracking Satellites (BSTS) and Space Surveillance and Tracking Satellites (SSTS). He also performed analysis of characteristics of laser beam and nuclear radiation interaction with materials, Transient Radiation Effects in Electronics (TREE), Electromagnetic Pulse (EMP), System Generated Electromagnetic Pulse (SGEMP), Single-Event Upset (SEU), Blast and, Thermo-mechanical, hardness assurance, maintenance, and device technology. His consultancy clients have included Sandia National Laboratories, and he holds patents in areas such as the design of diffusion furnaces, and Laser Activated Radioactive Decay. He is the author of several books on heat transfer and directed energy weapons technologies.