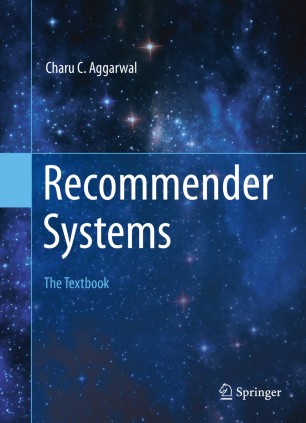 This book comprehensively covers the topic of recommender systems, which provide personalized recommendations of products or services to users based on their previous searches or purchases. Recommender system methods have been adapted to diverse applications including query log mining, social networking, news recommendations, and computational advertising. This book synthesizes both fundamental and advanced topics of a research area that has now reached maturity.  The chapters of this book  are organized into three categories:

- Recommendations in specific domains and contexts: the context of a recommendation can be viewed as important side information that affects the recommendation goals. Different types of context such as temporal data, spatial data, social data, tagging data, and trustworthiness are explored.

- Advanced topics and applications:  Various robustness aspects of recommender systems, such as shilling systems, attack models, and their defenses are discussed.

In addition, recent topics, such as learning to rank, multi-armed bandits, group systems, multi-criteria systems, and active learning systems, are introduced together with applications.

Although this book primarily serves as a textbook, it will also appeal to industrial practitioners and researchers due to its focus on applications and references. Numerous examples and exercises have been provided, and a solution manual is available for instructors.
About the Author: Charu C. Aggarwal is a Distinguished Research Staff Member (DRSM) at the IBM T.J. Watson Research Center in Yorktown Heights, New York. He completed his B.S. from IIT Kanpur in 1993 and his Ph.D. from the Massachusetts Institute of Technology in 1996. He has published more than 300 papers in refereed conferences and journals, and has applied for or been granted more than 80 patents. He is author or editor of 15 books, including a textbook on data mining and a comprehensive book on outlier analysis. Because of the commercial value of his patents, he has thrice been designated a Master Inventor at IBM. He has received several internal and external awards, including the EDBT Test-of-Time Award (2014) and the IEEE ICDM Research Contributions Award (2015). He has also served as program or general chair of many major conferences in data mining. He is a fellow of the SIAM, ACM, and the IEEE, for “contributions to knowledge discovery and data mining algorithms.”