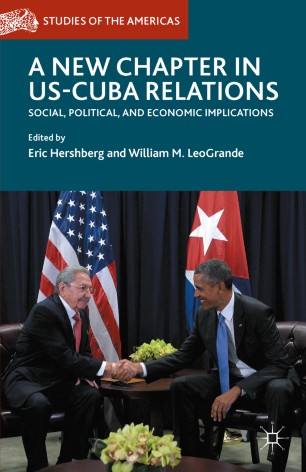 A New Chapter in US-Cuba Relations

This book explores the diverse consequences of Presidents Obama and Castro brokering a rapprochement between the United States and Cuba after more than half a century of estrangement. Economic, political, social, and cultural dynamics are analyzed in accessible fashion by leading experts from Cuba, the United States, Europe, and Latin America. What opportunities arise through the opening of diplomatic relations, and what issues may be obstacles to normalization? What are the implications for the Cuban economy, for its political system, and for ties with members of the Cuban diaspora? What are the implications for US relations elsewhere in Latin America? This up-to-date account addresses these and other questions about this new direction in US-Cuban relations.

Eric Hershberg is Professor of Government and Director of the Center for Latin American and Latino Studies at American University, USA. He has written widely on US-Latin American relations and on comparative politics of Latin America.
William M. LeoGrande is Professor of Government and Dean Emeritus of the School of Public Affairs at American University, USA. A noted authority on Cuban politics and U.S. Cuban relations, he is co-author, with Peter Kornbluh, of Back Channel to Cuba: The Hidden History of Negotiations between Washington and Havana (2015), and author of Our Own Backyard: The United States in Central America, 1977-1992 (1998).