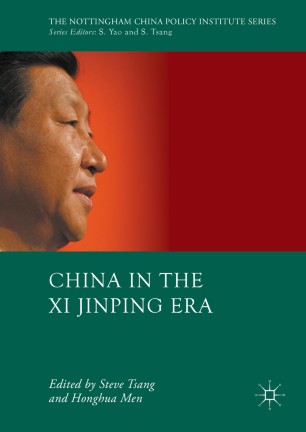 China in the Xi Jinping Era

This book examines the driving forces behind national-level politics, changes to the judiciary, social control, economic reform, environmental protection, urban development, the management of ethnic relations, as well as foreign and security policy orientation in China under Xi Jinping. It explains Xi's ambition, examines the limitations he has to confront, and maps the direction of reform he pursues. The book starts off by examining how the consultative Leninist nature of the political system continues to shape politics and policy in China under Xi, and what the China dream Xi advocates actually entails domestically and beyond China. It ends by highlighting the megatrends that will prevail in the decade when Xi is expected to stay in power. The book also includes contributions from five Central Party School professors whose views are taken seriously by the Chinese leadership.

Steve Tsang is Professor of Contemporary Chinese Studies and Head of the School of Contemporary Chinese Studies at the University of Nottingham, UK. He has previously served as Director of the China Policy Institute at Nottingham, and as Professorial Fellow, Dean, and Director of the Asian Studies Centre at St Antony's College, Oxford University, UK.
Honghua Men is Distinguished University Professor, President of the Institute for China and World Studies, and Dean of the School of Political Science and International Relations at Tongji University, Shanghai, China. He is concurrently the KF Chair Professor at the Central Party School of the Chinese Communist Party in Beijing, China.