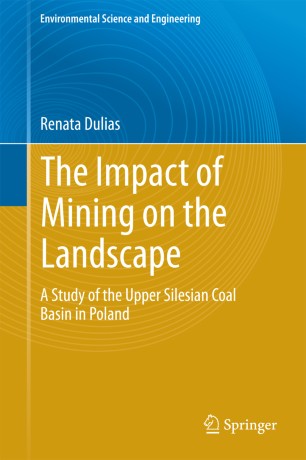 The Impact of Mining on the Landscape

A Study of the Upper Silesian Coal Basin in Poland

This book investigates the Upper Silesian Coal Basin (USCB), one of the oldest and largest mining areas not only in Poland but also in Europe. Using uniform research methods for the whole study area, it also provides a summary of the landscape transformations. Intensive extraction of hard coal, zinc and lead ores, stowing sands and rock resources have caused such extensive transformations of landscape that it can be considered a model anthropogenic relief.  The book has three main focuses: 1) Identifying anthropogenic forms of relief related to mining activity and presenting them from a spatial, genetic and age perspective; 2) Determining the changes in the morphometric characteristics of relief and the conditions for matter circulation in open systems (drainage basins) and closed systems (land-locked basins) caused by the extraction of mineral resources; and 3) Estimating the extent of anthropogenic denudation using two different methods based on raw-material output and morphometric analysis. In Poland, no other mining area has undergone such intensive mining activity as the Upper Silesian Coal Basin during the last half century. Its share in the total extraction of mineral resources was as high as 32%. The total extraction of hard coal in the Upper Silesian Coal Basin from the mid-18th century until 2009 was the sixth largest in the world, and the permanent, regional effects of mining anthropopressure on the relief are among the most severe in the world. The anthropogenic denudation rate in the Upper Silesian Coal Basin, as well as the Ruhr Coal Basin (Ruhr District) and the Ostrava-Karvina Coal Basin, ranges from several dozen up to several hundred times higher than the rate of natural denudation, irrespective of the calculation method used. It would take the natural denudation processes tens of thousands of years to remove the same amount of material from the substratum as that removed through human mining activity.