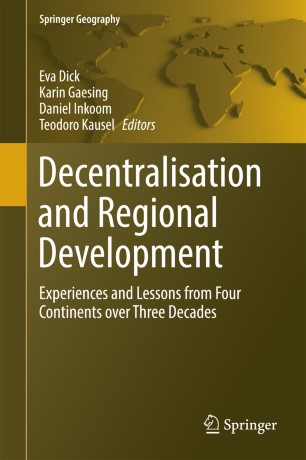 Experiences and Lessons from Four Continents over Three Decades

This book analyzes decentralisation, regional development paths and success factors in different governance sectors in Ghana, the Philippines, Tanzania and Chile, and discuss overarching aspects of relevance. Decentralisation, which refers to the delegation of administrative responsibilities, political decision-making and fiscal powers to lower levels of government, is now considered one of the most efficient engines of development. In Sub-Saharan Africa decentralised states have made more progress in reducing poverty than those states with lower decentralisation scores. But in many countries, decentralisation is still considered a ‘work in progress’ with unsatisfactory results. From a spatial point of view, the link between decentralisation and regional and district development is particularly interesting. Both in the North and in the South, regional or district development is seen as holding the potential for advancing social and economic development, and even more so in decentralised political settings. Space-based networks at the regional or district level are considered instrumental for responding to locally specific challenges, e.g. in areas lagging behind economically.