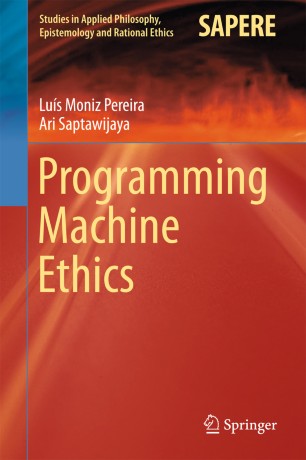 This book addresses the fundamentals of machine ethics. It discusses abilities required for ethical machine reasoning and the programming features that enable them. It connects ethics, psychological ethical processes, and machine implemented procedures. From a technical point of view, the book uses logic programming and evolutionary game theory to model and link the individual and collective moral realms. It also reports on the results of experiments performed using several model implementations.

Opening specific and promising inroads into the terra incognita of machine ethics, the authors define here new tools and describe a variety of program-tested moral applications and implemented systems. In addition, they provide alternative readings paths, allowing readers to best focus on their specific interests and to explore the concepts at different levels of detail.

Mainly written for researchers in cognitive science, artificial intelligence, robotics, philosophy of technology and engineering of ethics, the book  will also be of general interest  to other academics, undergraduates in search of research topics, science journalists as well as science and society forums, legislators and military organizations concerned with machine ethics.

Luís Moniz Pereira, born in Lisbon in 1947, is a Professor of Computer Science (retired) at Universidade Nova de Lisboa, and founder and director of CENTRIA (1993-2008), the Centre for Artificial Intelligence at the same University. He was elected a Fellow of the European Coordinating Committee for Artificial Intelligence (ECCAI) in 2001, received a doctor honoris causa degree from the TU Dresden in 2006 and has been part of the Board of Trustees and the Scientific Advisory Board of IMDEA, the Madrid Advanced Studies Software Institute, since 2006. He is the founding president of the Portuguese Artificial Intelligence Association (APPIA), and serves on the editorial boards of various scientific journals. His research, which he has presented in hundreds of publications, focuses on knowledge representation and reasoning, logic programming, and the cognitive sciences. Currently, he is affiliated with the NOVA Laboratory for Computer Science and Informatics (NOVA-LINCS). More detailed information, including his awards, teaching and publications, can be found at http://centria.di.fct.unl.pt/~lmp/.

Ari Saptawijaya, born in Denpasar (Indonesia) in 1976, is an assistant professor at the Faculty of Computer Science, Universitas Indonesia. He received his Master degree in Computational Logic from Technische Universität Dresden in 2004, and a PhD in Informatics from Universidade Nova de Lisboa in 2015. His research interests include knowledge representation and reasoning, logic programming, and the cognitive sciences.

“Programming Machine Ethics (PME) presents an alternative, combining traditional approaches to decision making with logic-based AI techniques. … PME draws upon a huge range of relevant work in philosophy, psychology, artificial intelligence and other disciplines, giving that work both computational and logical interpretations, and realising it by means of well-crafted computer implementations. The book fulfils an important need at a time when computers are interposing themselves into every aspect of our human lives.” (Robert Kowalski, AI & Society, Vol. 32 (111), March, 2017)

“This book is mostly about programming normative rules into robots and machines … . For those interested in the formalization of moral problems such that they can be solved by robots, it is a must read.” (Sean Welsh, Minds & Machines, August, 2016)