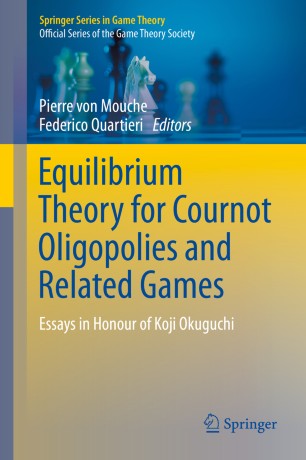 Essays in Honour of Koji Okuguchi

This state-of-the-art collection of papers on the theory of Cournotian competition focuses on two main subjects: oligopolistic Cournot competition and contests. The contributors present various applications of the Cournotian Equilibrium Theory, addressing topics such as equilibrium existence and uniqueness, equilibrium structure, dynamic processes, coalitional behavior and welfare. Special emphasis is placed on the aggregative nature of the games that are relevant to such theory. This contributed volume was written to celebrate the 80th birthday of Prof. Koji Okuguchi, a pioneer in oligopoly theory.

Pierre von Mouche (1959) studied theoretical physics, mathematics and astronomy at the University of Nijmegen. He received his PhD in mathematics from the University of Utrecht under the supervision of Hans Duistermaat. Since 1989 he holds a position in economics at Wageningen University. His scientific interest include mathematical economics and in particular the equilibrium structure of games in strategic form.