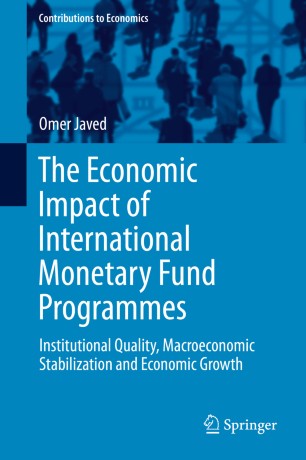 This book investigates the impact of International Monetary Fund (IMF) programmes on macroeconomic instability and economic growth in recipient countries. Employing the New Institutional Economics approach as an analytical framework, it identifies the determinants of economic and political institutional quality by taking into account a broad variety of indicators such as parliamentary forms of government, the aggregate governance level, civil and economic liberties, property rights etc. The book subsequently estimates the impact of these institutional determinants on real economic growth, both directly and also indirectly, through the channel of macroeconomic instability, in recipient countries. Moreover, it illustrates the effectiveness of IMF programmes in the case of Pakistan, a frequent user of IMF resources.

Omer Javed holds a PhD in Economics degree from the University of Barcelona (Spain). He previously completed his masters in economics from the University of York (United Kingdom), and earlier from Government College University Lahore (Pakistan). In his doctoral thesis, he focused on the frameworks and determinants of institutions, and their impact on macroeconomic stability, and economic growth in International Monetary Fund (IMF) member countries. In 2015, a research paper, related but not a part of his doctoral thesis, ‘Institutional determinants: a case study of IMF programme and non-programme countries’ was published as a chapter in the book, ‘The Political Economy of Governance: Institutions, Political Performance and Elections’ (Springer 2015). His work experience spans both the public and private sectors. Moreover, his work as an economist at the Resident Representative Office of IMF in Pakistan served as a strong motivation in his choice of specialization in the doctoral thesis.