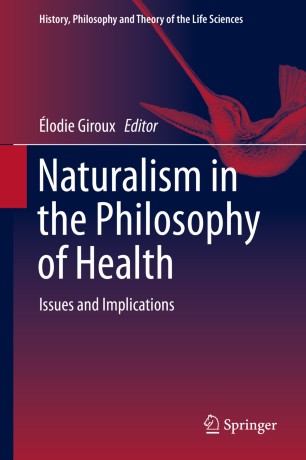 Naturalism in the Philosophy of Health

Part of the History, Philosophy and Theory of the Life Sciences book series (HPTL)

In a series of papers published in the 1970s, Christopher Boorse proposed a naturalist theory of health, mainly based on a value-free concept of ‘biological function’, a concept of ‘reference class’ and the notion of ‘statistical normality’. His theory has profoundly shaped the philosophical debates on the concepts of health and disease. It could even be said that the numerous criticisms of his 'biostatistical theory' are at the centre of what is usually referred to as the debate between ‘normativists’ and ‘naturalists’. Today, the predominant naturalist theory of health is still Boorse’s biostatistical theory.

In the first section, several contributions identify the kind of ‘naturalism’ the biostatistical theory belongs to and offer further criticisms or possible modifications, such as the concept of function that is required by this theory, and whether a comparativist approach to health is more relevant than a non-comparativist one. The second section explores natural or biological ‘normativity’ and some possible accounts of health that could be based on this concept. The third and final section focuses on the implications of naturalism in healthcare. 'Goals of Medicine’ is the first paper in which Christopher Boorse ventured toward analysing the implication of his biostatistical theory of health on the practice of medicine, the difficult issue of the goals of medicine and the boundary between treating and enhancing. Other papers in this section critically evaluate Boorse’s account and analyse the importance of a positive concept of health.