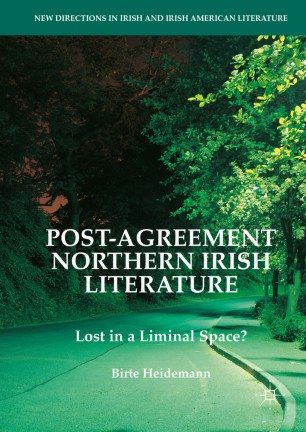 Lost in a Liminal Space?

This book uncovers a new genre of ‘post-Agreement literature’, consisting of a body of texts – fiction, poetry and drama – by Northern Irish writers who were born during the Troubles but published their work in the aftermath of the Good Friday Agreement. In an attempt to demarcate the literary-aesthetic parameters of the genre, the book proposes a selective revision of postcolonial theories on ‘liminality’ through a subset of concepts such as ‘negative liminality’, ‘liminal suspension’ and ‘liminal permanence.’ These conceptual interventions, as the readings demonstrate, help articulate how the Agreement’s rhetorical negation of the sectarian past and its aggressive neoliberal campaign towards a ‘progressive’ future breed new forms of violence that produce liminally suspended subject positions.

Birte Heidemann is a Postdoctoral Researcher at the Chair of Postcolonial Literary and Cultural Studies, University of Bremen, Germany. She is the co-editor of From Popular Goethe to Global Pop (2013), Reworking Postcolonialism (2015) and two special editions of the Journal of Postcolonial Writing (vol. 47.5 and 48.3). Her current research project deals with post-conflict Sri Lankan literature.

“Intellectually engaging and thoroughly well-researched, Post-Agreement Northern Irish Literature is an original intervention in a hotly contested field. Birte Heidemann focuses welcome critical attention on an emergent generation of Northern Irish writers who are responding to history and its legacies in provocative and challenging ways.” (Liam Harte, University of Manchester, UK)

“Post-Agreement Northern Irish Literature offers one of the comprehensive accounts of the field, drawing on a sophisticated version of postcolonial theory and an original use of the notion of liminality. The book’s theoretical investigation discusses, with poise, clarity and intelligence, literature produced in Northern Ireland since the end of the Troubles.” (Colin Graham, Senior Lecturer, Department of English, NUI Maynooth)

“This is an outstanding work of cultural and literary criticism. It astutely theorises the post-Agreement situation of Northern Ireland; and it reveals the intricate diagnostic powers of recent fiction, poetry and drama to challenge the status quo. A must-read for those interested in Northern Irish literatures and debates.” (Lars Eckstein, Professor of Anglophone Literatures and Cultures, University of Potsdam)