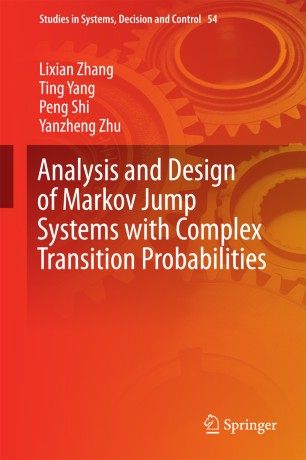 Part of the Studies in Systems, Decision and Control book series (SSDC, volume 54)

The book addresses the control issues such as stability analysis, control synthesis and filter design of Markov jump systems with the above three types of TPs, and thus is mainly divided into three parts. Part I studies the Markov jump systems with partially unknown TPs. Different methodologies with different conservatism for the basic stability and stabilization problems are developed and compared. Then the problems of state estimation, the control of systems with time-varying delays, the case involved with both partially unknown TPs and uncertain TPs in a composite way are also tackled. Part II deals with the Markov jump systems with piecewise homogeneous TPs. Methodologies that can effectively handle control problems in the scenario are developed, including the one coping with the asynchronous switching phenomenon between the currently activated system mode and the controller/filter to be designed. Part III focuses on the Markov jump systems with memory TPs. The concept of σ-mean square stability is proposed such that the stability problem can be solved via a finite number of conditions. The systems involved with nonlinear dynamics (described via the Takagi-Sugeno fuzzy model) are also investigated. Numerical and practical examples are given to verify the effectiveness of the obtained theoretical results. Finally, some perspectives and future works are presented to conclude the book.

“This book collects some of the authors’ previous results on Markov jump systems (MJSs) subject to complex transition probabilities (TPs) as well as the original developments on the stability analysis of MJSs. … This book can be used in undergraduate and graduate study. It can be also suitable as a reference for engineers and researchers in the field of systems with jump Markov perturbations.” (Vasile Drăgan, Mathematical Reviews, January, 2017)
Buy options