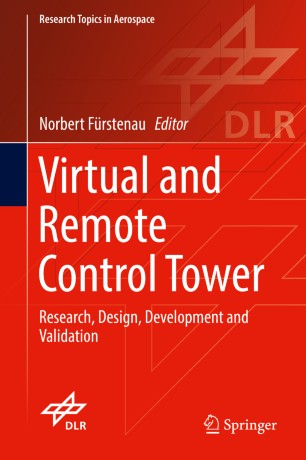 Part of the Research Topics in Aerospace book series (RTA)

The interdisciplinary research and development work carried out in the last ten years which is presented in this book aimed at replacing the conventional airport control tower by a new “remote tower operation” work environment (RTO) which should enhance work efficiency and safety and reduce costs. This revolutionary human–system interface allows for remote aerodrome traffic control without a physical tower building and enables the establishment of remote airport traffic control centers (RTC) of which each may serve several airports from a central location.

Dr. phil.-nat. Norbert Fürstenau, Dipl. Physiker, studied physics from 1971 to 1978 at Universities of Braunschweig, Darmstadt and Frankfurt. In 1977 he received the Diplom Physiker degree from the Inst. of  Nuclear Physics of TU-Darmstadt and in 1981 the Dr. phil.-nat. degree from Frankfurt University for research on Laser applications in Biophysics. In his dissertation he investigated the generation of large molecular clusters (predecessors of Carbon Buckeyballs) through Laser evaporation in a micro mass analyser, and his interest started in the emerging topic of complex systems and Synergetics. After a short period as a post-doc researcher including teaching tasks at the Institute of Medical Physics / Biophysics, he accepted a permanent position at the DLR Inst. of Flight Guidance in Braunschweig in 1981. Starting with research in inertial navigation and Laser gyro technology, he initialized in 1984 the Fiber Optic Sensors research as group leader at the Department of Inertial Navigation / Measurement Technologies. The main focus was directed to fiber optics based interferometric micro sensors and methods for structural monitoring (so called fiber optic smart structures).  During these years numerous research visits and international cooperations with laboratories in Canada, Korea, and Russia  resulted in a large number of conference and journal publications.

After the research focus of the Inst. of Fligt Guidance had turned more and more away from aircraft towards air traffic, the research in measurement technologies gradually ended and in 1999 the editor joined the Human Factors Department where he started the “Virtual Tower” concept study (2002–2004), after winning a first prize within DLR’s first “Visionary Projects” competition, endowed with an initial research grant. He was project leader of DLR’s “Remote Airport Tower Operations” projects RApTOR (2005-2007) and RAiCe (Remote Airport Traffic Control Center, 2008-2012). In 2010 he spent a research semester at NASA-Ames Advanced Displays Lab.(working with Steve Ellis, author of the foreword and (co-) author of two book chapters), preparing psychophysics experiments for Remote Tower characterization. In 2011 the editor was again winner at the fifth DLR-Visionary Projects competition. The proposal: “Extreme Events Prediction” received a starting grant that supported his growing interest in complex systems dynamics. In 2014 he joined the Controller Assistance department where he is currently responsible for DLR’s contribution to the European collaborative project “Robust-ATM” (2013 – 2016) that addresses air traffic optimization under disturbance using advanced mathematical methods. His research interest had always an interdisciplinary touch and is presently focused on nonlinear dynamics and modeling of diverse complex systems including human perception (two recent journal papers in “Biological Cybernetics” and “Cognitive Processing”) and air traffic management under external stochastic disturbance. He is (co-) author of ca. 120 conference and journal papers and 17 patents. The Remote Tower patent was recently licensed to a company for commercialisation, and it describes the basics of an increasing number of installations worldwide, presently under operational validation.