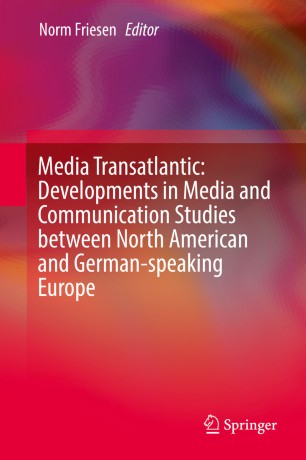 This book reflects recent scholarly and theoretical developments in media studies, or Medienwissenschaft. It focuses on linkages between North America and German-speaking Europe, and brings together and contextualizes contributions from a range of leading scholars. In addition to introducing English-language readers to some of the most prominent contemporary German media theorists and philosophers, including Claus Pias, Sybille Krämer and Rainer Leschke, the book shows how foundational North American contributions are themselves inspired and informed by continental sources. This book takes Harold Innis or Marshall McLuhan (and other members of the “Toronto School”) as central points of reference, and traces prospective and retrospective lines of influence in a cultural geography that is increasingly global in its scope. In so doing, the book also represents a new episode in the international reception and reinterpretation of the work of Innis and McLuhan, the two founders of the theory and study of media.

Norm Friesen (born March 21, 1966) is associate professor in Educational Technology at Boise State University. Norm Friesen studied German Literature, Secondary Education, and Communication at the Johns Hopkins University, University of Alberta and Simon Fraser University (respectively). He has undertaken teaching and research at the University of Toronto, the University of Innsbruck and Athabasca University. He has led the CanCore Learning object metadata initiative from 2003 to 2010, and is co-editor of the peer reviewed open content journal Phenomenology and Practice. Dr. Friesen is also a member of the Canadian delegation to the ISO/IEC JTC1 subcommittee 36, for Learning, Education and Training.[1] Dr Friesen has been involved in Wikiversity research. Dr. Friesen's research interests include media theory, alternative pedagogies, technical e-learning standardization, phenomenology and ethnomethodology.