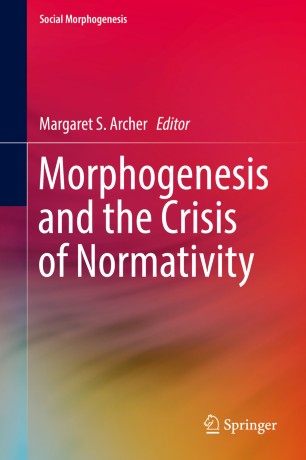 Morphogenesis and the Crisis of Normativity

This volume explores the development and consequences of morphogenesis on normative regulation. It starts out by describing the great normative transformations from morphostasis, as the precondition of a harmonious relationship between legal validity and normative consensus in society, to morphogenesis, which tends to strongly undermine existing laws, norms, rules, rights and obligations because of the new variety it introduces. Next, it studies the decline of normative consensus resulting from the changes in the social contexts that made previous forms of normativity, based upon ‘habits, ‘habit us’ and ‘routine action’, unhelpfully misleading because they no longer constituted relevant guidelines to action. It shows how this led to the ‘Reflexive Imperative’ with subjects having to work out their own purposeful actions in relation to their objective social circumstances and their personal concerns, if they were to be active rather than passive agents. Finally, the book analyses what makes for chance in normativity, and what will underwrite future social regulation. It discusses whether it is possible to establish a new corpus of laws, norms and rules, given that intense morphogenesis denies the durability of any new stable context.