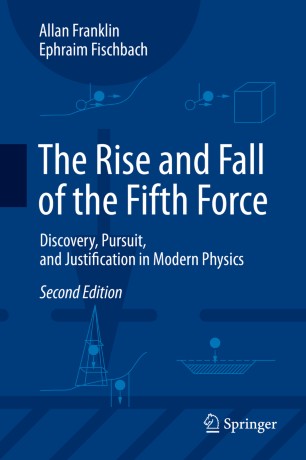 The Rise and Fall of the Fifth Force

This book provides the reader with a detailed and captivating account of the story where, for the first time, physicists ventured into proposing a new force of nature beyond the four known ones - the electromagnetic, weak and strong forces, and gravitation - based entirely on the reanalysis of existing experimental data.

Back in 1986, Ephraim Fischbach, Sam Aronson, Carrick Talmadge and their collaborators proposed a modification of Newton’s Law of universal gravitation. Underlying this proposal were three tantalizing pieces of evidence: 1) an energy dependence of the CP (particle-antiparticle and reflection symmetry) parameters, 2) differences between the measurements of G, the universal gravitational constant, in laboratories and in mineshafts, and 3) a reanalysis of the Eötvos experiment, which had previously been used to show that the gravitational mass of an object and its inertia mass were equal to approximately one part in a billion. The reanalysis revealed that, contrary to Galileo’s position, the force of gravity was in fact very slightly different for different substances. The resulting Fifth Force hypothesis included this composition dependence and also added a small distance dependence to the inverse-square gravitational force.

Over the next four years numerous experiments were performed to test the hypothesis. By 1990 there was overwhelming evidence that the Fifth Force, as initially proposed, did not exist. This book discusses how the Fifth Force hypothesis came to be proposed and how it went on to become a showcase of discovery, pursuit and justification in modern physics, prior to its demise.

In this new and significantly expanded edition, the material from the first edition is complemented by two essays, one containing Fischbach’s personal reminiscences of the proposal, and a second on the ongoing history and impact of the Fifth Force hypothesis from 1990 to the present.

Professor Franklin's research is on the history and philosophy of science, with particular emphasis on the role of experiment in physics. On the philosophical side, he has worked on the Duhem-Quine problem,  the question of how one can localize support or refutation, and on confirmation theory, using a Bayesian approach. More recently he has worked on the fallibility and corrigibility of experimental results and the resolution of discordant results.

Professor Fischbach is an originator of the fifth force hypothesis and Fellow of the American Physical Society (2001) for his contributions to understanding the connection between precision gravity measurements and high-energy physics.