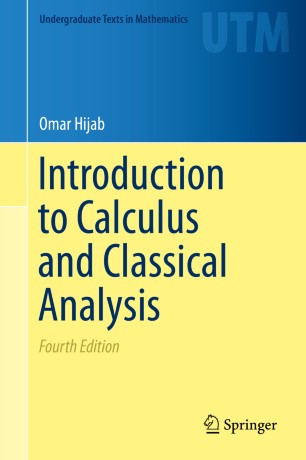 Introduction to Calculus and Classical Analysis

This completely self-contained text is intended either for a course in honors calculus or for an introduction to analysis. Beginning with the real number axioms, and involving rigorous analysis, computational dexterity, and a breadth of applications, it is ideal for undergraduate math majors. This fourth edition includes an additional chapter on the fundamental theorems in their full Lebesgue generality, based on the Sunrise Lemma.

Key features of this text include:

• Applications from several parts of analysis, e.g., convexity, the Cantor set, continued fractions, the AGM, the theta and zeta functions, transcendental numbers, the Bessel and gamma functions, and many more;

• A heavy emphasis on computational problems, from the high-school quadratic formula to the formula for the derivative of the zeta function at zero;

• Traditionally transcendentally presented material, such as infinite products, the Bernoulli series, and the zeta functional equation, is developed over the reals;

• A self-contained treatment of the fundamental theorems of calculus in the general case using the Sunrise Lemma;

• The integral is defined as the area under the graph, while the area is defined for every subset of the plane;

• 450 problems with all the solutions presented at the back of the text.

"This is a very intriguing, decidedly unusual, and very satisfying treatment of calculus and introductory analysis. It's full of quirky little approaches to standard topics that make one wonder over and over again, 'Why is it never done like this?'"

—John Allen Paulos, Author of  Innumeracy and  A Mathematician Reads the Newspaper

Omar Hijab is Professor of Mathematics and Associate Dean for Faculty Affairs, Information Technology, and Operations in the College of Science and Technology at Temple University. He received his Ph.D. in Mathematics from the University of California, Berkeley, and has served previously as Chair of the Department of Mathematics at Temple University. His research interests include systems theory and control; probability theory and stochastic processes; differential equations; mathematical physics; and optimization.