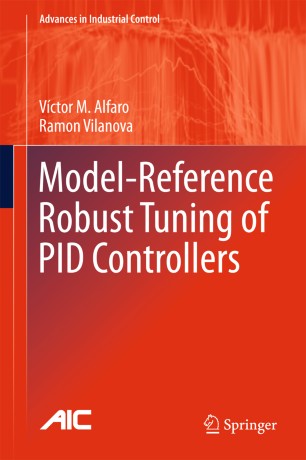 This book presents a unified methodology for the design of PID controllers that encompasses the wide range of different dynamics to be found in industrial processes. This is extended to provide a coherent way of dealing with the tuning of PID controllers. The particular method at the core of the book is the so-called model-reference robust tuning (MoReRT), developed by the authors. MoReRT constitutes a novel and powerful way of thinking of a robust design and taking into account the usual design trade-offs encountered in any control design problem.

The book starts by presenting the different two-degree-of-freedom PID control algorithm variations and their conversion relations as well as the indexes used for performance, robustness and fragility evaluation:the bases of the proposed model. Secondly, the MoReRT design methodology and normalized controlled process models and controllers used in the design are described in order to facilitate the formulation of the different design problems and subsequent derivation of tuning rules. Inlater chapters the application of MoReRT to over-damped, inverse-response, integrating and unstable processes is described. The book ends by presenting three possible extensions of the MoReRT methodology, thereby opening the door to new research developments. In this way, the book serves as a reference and source book for academic researchers who may also consider it as a stimulus for new ideas as well as for industrial practitioners and manufacturers of control systems who will find appropriate advanced solutions to many application problems.

Víctor M. Alfaro received his B.Sc. in Electrical Engineering from University of Costa Rica, San José, Costa Rica in 1972, carried out postgraduate studies in Automatic Control at Universidad de Chile, Santiago, Chile, received his M.Sc. in Electrical Engineering (Digital Systems) from Universidad de Costa Rica in 2006, and his Ph.D. in Telecommunication and Systems Engineering from Universitat Autònoma de Barcelona, Spain in 2012. He is Professor at the Department of Automation, School of Electrical Engineering of Universidad de Costa Rica.
He gained industrial experience by working in the fertilizer industry, and crude oil and refined products pipeline industry, and as consulting engineer in industrial processes control.
He has acted as a referee for several international journals and IEEE and IFAC conferences. He is coauthor of several book chapters and over 70 refereed journal and conference papers. His main research interests are robust two-degree-of-freedon PI(D) controllers, controller fragility, process control, and heterogeneous dynamic systems modelling and control with Modelica . He is a registered electrical engineer in Costa Rica and a Senior member of ISA.
Ramon Vilanova received the degree in Computer Science from the Universitat Autonoma de Barcelona, Spain in 1991. The M.Sc. and Ph.D. degrees followed also at the Universitat Autonoma de Barcelona in 1993 and 1996 respectively. His Ph.D. dissertation was on Two-Degree-of-Freedom control system analysis for robust tracking properties. From 1992 to 1996 he has been assistant lecturer and from 2006 onwards he is Professor for technical studies of Automatic Control and Systems Engineering at the Department of Telecommunications and Systems Engineering, Universitat Autònoma de Barcelona, Spain.
He has participated in several European projects as well as research projects funded by the Spanish national government. His teaching activity is centred on Systems Engineering, Industrial Process Control and Automation Systems. His main research interests are on controller design for systems with uncertainty, industrial process control with a strong emphasis on PID control, and control theory applications. Recently he focused his research interest on the application of process control techniques to wastewater treatment systems. Acting as a referee for several international journals and conferences, he is co-author of several contributed book chapters and about 100 refereed International Journal/ Conference papers. He is a member of CEA, IEEE and IFAC.