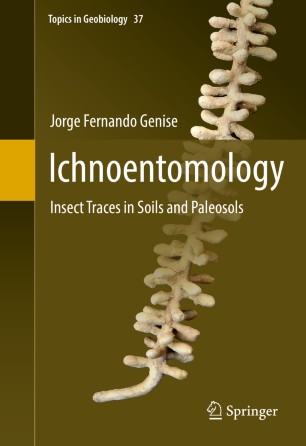 Insect Traces in Soils and Paleosols

Part of the Topics in Geobiology book series (TGBI, volume 37)

This book is devoted to the ichnology of insects, and associated trace fossils, in soils and paleosols. The traces described here, mostly nests and pupation chambers, include one of the most complex architectures produced by animals. Chapters explore the walls, shapes and fillings of trace fossils followed by their classifications and ichnotaxonomy. Detailed descriptions and interpretations for different groups of insects like bees, ants, termites, dung beetles and wasps are also provided.

Chapters also highlight the the paleoenvironmental significance of insect trace fossils in paleosols for paleontological reconstructions, sedimentological interpretation, and ichnofabrics analysis. Readers will discover how insect trace fossils act as physical evidence for reconstructing the evolution of behavior, phylogenies, past geographical distributions, and to know how insects achieved some of the more complex architectures. The book will appeal to researchers and graduate students in ichnology, sedimentology, paleopedology, and entomology and readers interested in insect architecture.

Jorge F. Genise is a Principal Researcher for the National Research Council of Argentina and founder of the National Ichnological Collection and Division Icnología of the Museo Argentino de Ciencias Naturales, where with his team he works on insect traces, extant and fossil, particularly in soils and paleosols, a field in which he is a recognized international expert. He is member of the editorial board of Ichnos (The International Journal of Animal and Plant Traces), invited lecturer in international ichnological and paleoentomological congresses, and president of the First International Congress on Ichnology. He has published several book chapters, more than 130 scientific articles and directed several doctoral theses on insect ichnology.

"In 695 pages the Argentine author Jorge Fernando Genise comprehensively describes the basics of ichnoentomology in order to encourage further research. For this very young scientific field, the book is an important milestone in advancing the study of insect traces and insect trace fossils. Insects and their traces in palaeosols have been observed and described by South Americans for about 200 years. Genise therefore had a good starting point. But what he made out of it over the years in his own research is truly remarkable. Luckily for all of us, he has written his knowledge down and published it in the present book." (Lothar H. Vallon, Paläozoologie)
Buy options